Whitehead signs off on LaGrange 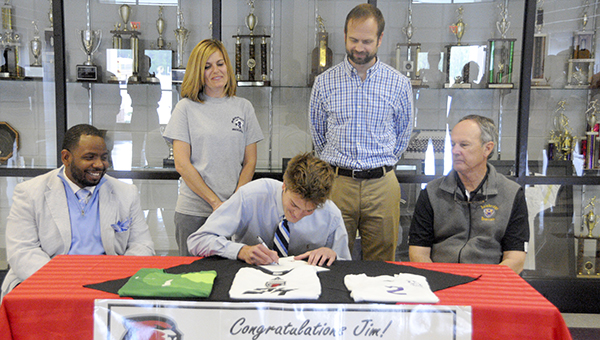 After bouncing from Grace Christian Academy to Cairo and finally to Bainbridge for his senior season, Bearcat senior Jim Whitehead signed to play soccer at LaGrange College Wednesday.
“Their players just really clicked with me and they had a good mind,” Whitehead said. “I just felt it was the right place to be. I liked the campus and felt like the team was a good fit for me.”
While playing as a Syrupmaker in 2012, Cairo soccer coach Robert Person said he moved Whitehead from a field player to a goalkeeper. He thrived and made 31 saves that season. He had 35 saves during the 2013 season.
At Bainbridge his senior year, Whitehead had 57 saves as a goalkeeper. BHS varsity soccer coach Mike Smith moved him to other positions on the field to help him get ready for college.
“Jim wasn’t very open to it at first, but he has played every position on the field,” Smith said. “He’s a versatile athlete. I’m preparing him for college. I want the young man to be successful.”
Smith also said Whitehead was coming from an outstanding group of young men.
“He came in and kept a good attitude about everything,” Smith said. “He always did things the right way and encouraged his teammates.”
Whitehead’s father, Richard, said he was proud to see his son rising to the level of collegiate competition after many years of hard work.
“This is a dream come true,” Richard said. “I’ve been playing and coaching my whole life, so for him to be continuing on with a college career makes me extremely excited. I’m looking forward to it for him, and to a certain extent, for me. I can’t wait for the next four years.”
Whitehead said his biggest excitement comes from just getting the chance to go to college.
“I’m just excited to be going to college and getting the experience my freshman year, playing soccer at a higher level and traveling,” he said.