77 balloons released for child abuse victims in the region 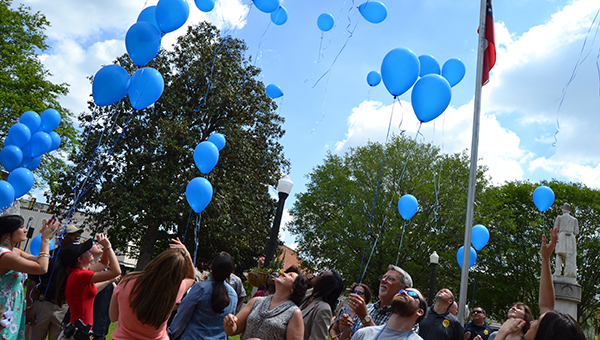 Wednesday blue balloons flew over the gazebo in Willis Park into blinding sunlight. A group of supporters that gathered to release them for Child Abuse Awareness Month squinted, as the blue dots were lost in the glaring noon sky.

Amy Eakin, the director of the Oak House Child Abuse Advocacy Center said the group released 77 balloons Wednesday, representing the 77 children throughout the five-county region who were abused in 2013. While the 77 balloons released this year are a big increase from the 33 released last year, there were no child fatalities in 2013, when there were two in 2012.

“We adults bringing awareness to child abuse is a good way to stop it and I know it is kind of a dirty subject sometimes but it needs to be talked about,” Eakin said.

District Attorney for the South Georgia Judicial Circuit Joe Mulholland spoke to those gathered in the park about his experience with child abusers and what law enforcement can do to help child abuse in the area.

“When a grand juror asked me after a case, what makes a person abuse a child like this, a law enforcement officer said, ‘they are just monsters,’” Mulholland said. “But with all do respect I don’t think these people are monsters. I disagree, I think most of the child abuse I have seen in my experience is not a monster but it is someone who doesn’t know how to deal with children.
Mulholland referenced the case of Deonte Smith who shook his infant child violently to death in 2012. Mulholland said the case was horrifying.

“I think as law enforcement we need to utilize a resource we have right here in our community,” Mulholland said. “Some of the resources we have are underutilized. We have the Oak House and the Young Foundation where victims can go, and unfortunately, the community doesn’t know a lot about these programs.”

Mulholland said law enforcement and the group gathered for the balloon release Wednesday, should reach out to those that need help and offer up the resources that already exist in the community and spread awareness about them.

“This is a problem that can be rectified,” Mulholland said. “These people are savable and we can get them help.”

One middle schooler wants to make Bainbridge a better…