One middle schooler wants to make Bainbridge a better place 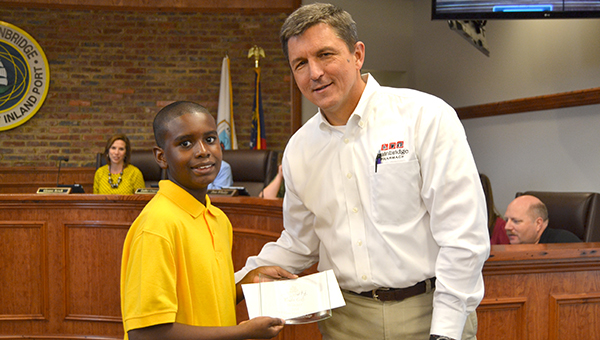 Hutto Middle School student Keon Guy won this year’s “If I Were Mayor…” essay contest and wrote about recycling programs, having unity and helping elderly.

Last Tuesday, the city of Bainbridge recognized the winner and runner up in the annual Georgia Municipal Association “If I Were Mayor…” essay contest.
The winner Keon Guy of Hutto Middle School gaveled the meeting into order and led those gathered in the Pledge of Allegiance.
Mayor Edward Reynolds presented Guy and runner up Piper Harrell, also of Hutto Middle School, with plaques and Bainbridge Bucks.
The following essay is that of Guy’s and was read at the council meeting:
“If I were Mayor of the City of Bainbridge, I would make it my duty to create a clean environment, persuade outside businesses to come to Bainbridge, and make the community safe for the youth and the elderly.
To start, my first duty of mayor is keeping the environment clean, I would ask the community to come together and start recycling. I would then come up with programs for the schools to take trips to the river and clean up so that the wild life would have a livable habitat.
Getting these abandoned houses tom down and repair can also clean up the environment. By coming together as a community, we can work together to keep Bainbridge’s environment clean.
The next project I would do as Mayor is create programs so that outside businesses would come to Bainbridge.
Having more businesses will keep the economy growing and bring in more money. By producing businesses you would create job opportunities thus reducing crimes such as robbery. Robbery is the biggest crime that is affecting our community. Getting more factories to move to Bainbridge, so our people would stay in Bainbridge to work. By doing so it would keep more money in town. More businesses would help to support families and keep them above poverty levels.
Last but not least, my final duty as mayor would be to create a youth and elderly safe community. I would set up meetings for both age groups to talk about teaming up for community watch programs. All I set up the meetings, I would also have fellow officers on or off duty attending the meetings.
These officers must be trained to perform those duties. All officers that are involved must be physically, emotionally, and mentally involved with the youth and elderly. Officers need to patrol certain areas more than others.
To conclude, as Mayor I would put forth my best effort to achieve the goals and duties that I have set for the City of Bainbridge. A clean environment, more businesses and a safer community would make Bainbridge a better and more attractive place to live. So let’s all work together to make Bainbridge beautiful and safe.”