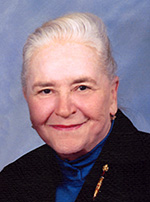 Oline Miller Reynolds, 81, of Bainbridge, passed away Sunday, April 20, 2014 at her residence.

Mrs. Reynolds was born Sept. 24, 1932 in Climax, Ga., the daughter of Louis Olice Miller and Lucy Cornelia Gill Miller. She was a graduate of Climax High School and received her Bachelor of Arts degree from Mount Berry College. She did graduate work at Mercer University and the University of Florida, and taught school for several years at Baker County High School and Cairo High School. She was a homemaker and a member of First United Methodist Church. She was very active in the Decatur County Historical Society and served as an officer in the Historic Chattahoochee Commission.

She loved growing and working with roses. She was a Past District Director and served on the board of the American Rose Society. She was a member of the World Federation of Rose Society with whom she was a nationally known and accredited roses judge.

She was preceded in death by her brothers, Gill Miller, Bill Miller, and Carney Miller.