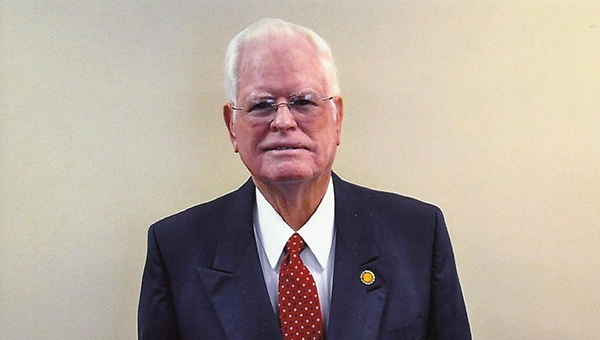 Dr. R.H. (Ray) Boyett, PhD. Climax native and graduate of Climax High School has been selected to receive the Berry Alumni Association’s 2014 Distinguished Achievement Award.
Berry College has outstanding alumni all over the world, and according to information provided by the alumni association, Boyett’s achievements are especially outstanding, making him very deserving of this high honor.
Saturday, May 31, the Berry Alumni association will hold an Alumni Gala in the Riverside Ballroom at the Form in downtown Rome, Ga., where Boyett will be presented and receive a framed certificate and award medallion during the ceremony.
In addition, a plaque with his name will be placed in the Berry College Alumni Hall of Fame located in Berry’s Alumni Center in the historic Ford Building Complex located on the Berry college campus.
Prior to the gala, an award reception will be held in the Riverside Ballroom for Boyett where he will have his photo made with Dr. Stephen Briggs, Berry College president and Harry Wise, Berry Alumni president, and meet other winners of the Alumni award.
Boyett, a resident of the Climax community, is retired from the Region Four Office of the Federal Emergency Management Agency, where he was responsible for administering Federal Budgets in excess of $15 million each year to assist State and local Governments in preparing for and recovering from catastrophic and nuclear emergency situations.
His experience and career spanned some forty years as a Research and Applied Health Physicist at the Oak Ridge National Laboratory, professor of Physics and Nuclear Technology at Chattanooga State Technical Community College and as Administrator of the Nuclear Radiation Safety Program or the Federal Emergency Management Agency’ Region Four Comprising the States of Alabama, Florida, Georgia, Kentucky, Mississippi, North Carolina, South Carolina and Tennessee.
He was reared and educated in Decatur County as a graduate of Climax High School graduating number two as an honor student class of 1954, and obtained the B.S. degree in Physics and Mathematics from Berry College (1958) honor graduate, and honor graduates of both the M.S. degree in Radiation Biophysics from the University of Florida (1963), and the PhD degree in Administration and Supervision of Postsecondary Technical Education from Florida State University (1978).
He was responsible for providing adult education in many professional courses offered by FEMA including a Special Disaster Preparedness’ course sponsored by The White House.
He is a Certified Health Physicist, Recertified and American Board of Health Physics.
While Research Health Physicist with the Oak Ridge National Laboratory, Oak Ridge, Tenn., Dr. Boyett participated in several health physics research projects such as developed and extrapolation ionization chamber (Narrow X-rays Beam Measurements) following the Robert Loevenger design of Stanford University, Palo Alto, California.
Used this devise to measure beta radiation does in tissue equivalent mediums with smaller and smaller chambers extrapolating doses down to a point radiation source.
A paper was presented at the Health Physics Society meeting in Los Angeles, Cali., in June 1965 titled “An Empirical Approach to the Bea Dosimetry of Discrete Sources in Inhomogeneous Media.” The paper was based on this research work.
He was ordained as a Deacon in the Oak Ridge Primitive Baptist Church in 1966 and served as Clerk and treasurer of the same church for 10 years.
Boyett sat in the ordination of numerous deacons and ministers and served as Clerk of the Presbytery for these services. He is currently serving as clerk of the Ochlocknee Primitive Baptist Association in Southwest Georgia and also serves as senior deacon of Community P.B. Church for 35 years as well as currently serving as church clerk.
In 2012, Boyett was inducted into the Georgia Country Music Hall of Honor in Atlanta for his outstanding accomplishments as a volunteer to the Georgia Mountain Fair in Hiawassee. He has performed and volunteered for 15 years at the fair since retiring from FEMA.
Activities include writing and playing classic county, blue grass, western swing, gospel and big band era music for many people coming to the fair. He has also provided many concerts for numerous festivals throughout the states of Georgia and Florida.
Boyett is the son of the late James Edgar and Pauline Rackley Boyett of Climax.
He is married to Nancy Grace Tichenor Boyett and they have one daughter, Dr. Ranan Stimpson, OD, and son-in-law Todd Stimpson, both graduates of Berry College.
They have one grandson, Daniel, who will be attending Berry College in the fall as a freshman.
Climax is very proud to feature another one of our Climax High School graduates who has made a difference in the lives of others.