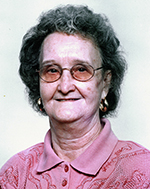 Annie Ruth Davis, 82, of Bainbridge, passed away Wednesday, April 2, 2014 at her residence.

The funeral service will be held at 10 a.m. on Saturday, April 5, 2014 at Ivey Funeral Home Chapel with Rev. Warren Fox officiating and will conclude at the chapel. Interment will be at Eldorendo Baptist Church Cemetery with Stacy Davis, Casey Davis, Hal Davis, David Seoane, Will Bennett and Earnest Loyd serving as active pallbearers.

Mrs. Davis was born Dec. 15, 1931 in Dothan, Ala., the daughter of Harvey Jackson Cook and Nadine Herrington Cook. She graduated from Brinson High School, Class of 1948. Mrs. Davis worked for Jack Winter, Inc., Cannon’s Cleaners, and Walmart. She was an active member in Woodmen Of The World, a member of Eldorendo Baptist Church, and attended Morningside Baptist Church.

She was preceded in death by her husbands, George Davis and Gerald Armstrong; and her brother, James Howard Cook.

Ivey Funeral Home is in charge of arrangements.