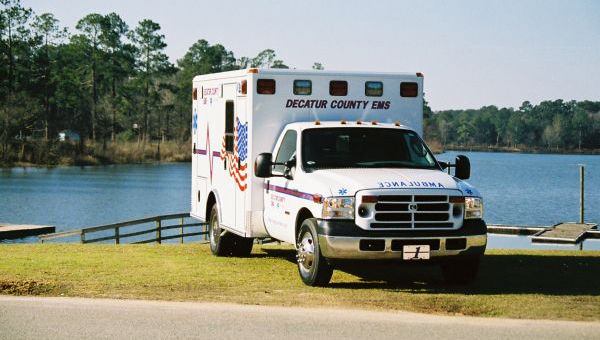 “Well they can handle it themselves then,” Joiner told Seminole County EMS.
“(Decatur County) isn’t going to be able to?” Seminole County asked in a recording of the conversation.
“No,” Joiner replied, according to the recorded phone conversation.
Decatur County’s three ambulances were not handling calls at the time according to a list of responses made the night of March 12. The immediate call before Seminole County requested mutual aid lasted from 11:41 p.m. to 12:07 a.m. After Seminole County’s request at 12:46 a.m., Decatur County EMS did not receive another call until 10:23 a.m., nearly 10 hours later.
Decatur County Deputy EMS Chief Larry Battle gave Joiner a three-day suspension.
Joiner has a history of poor job performance, with numerous disciplinary actions taken against her since she began working for Decatur County EMS in 2001, including a charge of neglect of duty.
When asked to comment on why Decatur County refused mutual aid to Seminole County, Decatur County Administrator Gary Breedlove declined to do so without the submission of an open records request. No such open records request exists for comments from a source.
“Who knows if we could have saved that person’s life or not,” Decatur County Commissioner Butch Mosely said. “The bottom line is we didn’t respond.”
There is no written mutual aid agreement between Decatur and Seminole counties according to both EMS systems, but officials from both counties say the two parties cooperate with one another regularly and without issues.
“I am advised that the Decatur County EMS has historically responded to calls for assistance from surrounding counties, and those counties do the same,” Decatur County attorney Brown Moseley said.
Seminole County’s manager, Paula Granger, said she believes there is a signed agreement for the two counties regarding mutual aid EMS calls, but Granger noted she and officials from Decatur County were not able to locate the document.
“Mutual aid is a critical component to EMS in rural counties and is another area of much concern in addition to the other finding during the recent assessment,” Granger said.
Seminole County, because of the March 12 incident, will now be broadcasting mutual aid calls to all surrounding areas, not calling one EMS system specifically to request help. In addition, Granger will be drafting an official policy if she does not locate one.
The incident comes two weeks after Georgia EMS analyzed Decatur and Seminole counties’ EMS system and reported on a lack of personnel structure, poor leadership and a failure to adhere to current clinical standards.
Decatur County commissioners made clear they were aware of the current condition of Decatur County’s EMS when this information was presented to them.
“We’re upset with it,” Decatur County Commissioner Frank Loeffler said. “I’m not certain that this is the last thing we say about it.”
Guber’s widow said she believes her husband was dead upon her call to 911.
“I don’t think anyone could have saved him,” Guber said.
In a recording of the 911 phone call by Guber obtained by the Post-Searchlight, Guber only indicated to EMS that her husband had a stroke.
“I think my husband had a stroke,” Guber said to Seminole County 911. “I am by myself and need someone to come and help me.”