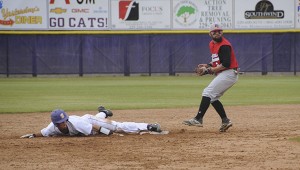 Ben Day watches for the umpire’s call after sliding into second base during game one against Lee County Thursday. — Powell Cobb

The Trojans gave two more losses to the Bearcat baseball team in a doubleheader at the Bainbridge fields Thursday.
In game one, the Bearcats fell behind three runs in the third inning to Lee County and had difficulty bouncing back from there. They lost 3-1.
Junior Blake Merchant scored on a walk by Jordan Davis with bases loaded in the sixth inning. Bainbridge worked toward a rally, but a strong Trojan defense kept them from coming back from behind.
Matt Hatcher pitched 5 2/3 innings and allowed one earned run on two hits. Hatcher faced his toughest moment of the night when he walked three Bearcats and allowed the bases to become loaded.
Bainbridge pitcher Tate Lambert lasted through all seven innings, striking out 11 and allowing all three Lee County runs.
In game two, the Trojans refused to relinquish the lead after grabbing it early, finishing the match with an 8-2 victory.
The game was decided quickly as Lee County racked up two run in the first inning. A two-run error in the first inning helped Lee County Trojans Varsity put the runs on the board early.
The Trojans then put up four more runs in the third inning. By the top of the fourth inning, the Bearcats were down 6-1 and looking to make a comeback.
Manny Chavarria got a hit in each of his two at bats. He doubled in the second inning and singled in the fifth inning.
Nick Bush gave up just two hits, allowed no earned runs, walked two and struck out four during his 4 2/3 innings of work.
Grant McDonald went 2-2, singling in the first and seventh innings.
Bainbridge pitcher Tyler Braswell allowed eight runs in seven innings, walked nine and struck out seven.
The Bearcats take to the field next Thursday, April 3, to play R.F. Monroe at 5:30 p.m.