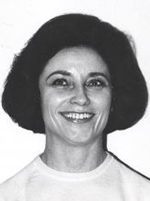 Rigmor Nina Moore died in her sleep on Monday, March 24, 2014, in her home near Havana, Florida. She was 92 years old.
Rigmor was born in Masnedsund, Zealand, Denmark on Feb. 11, 1922. Her parents were Alma and Kristian Kristiansen. Her father was a train conductor.
Rigmor attended elementary school in Masnedsund, middle school in nearby Vordingborg where her family had relocated, and finished her education in Copenhagen when she and her family took up permanent residence there.
She was employed from the time she was a teenager, first in a bookstore, then in the shipping department of a paint manufacturer, and then in several different departments of the Danish National Government, particularly the Department of Defense.
Rigmor served in the Danish Air Force Home Guard at the same time as Princess Margrethe. Rigmor achieved the rank of lieutenant, Margrethe became the Queen of Denmark.
When a small Corps-size NATO subordinate command was organized to provide command and control of land forces in Jutland, Denmark and Schleswig-Holstein, West Germany, a Danish Major General was selected as the first commander. The Commander, MG F.B. Larsen chose Rigmor to be his personal secretary. Four months later, on Feb. 11, 1963 the first American officer arrived on station, and the US flag was raised for the first time in front of Headquarters Allied Land Forces Schleswig-Holstein and Jutland. On October 11, 1963, that officer, Major Ernest Winfield Moore and that secretary, Rigmor Kristiansen Lohne, were married in Plon, Schleswig-Holstein, West Germany. In August 1965 they were reassigned to a new duty station in the United States. They retired from the US Army on 31 July 1977 and celebrated their 50th Wedding Anniversary on October 11, 2013.
Rigmor was predeceased by her parents and one sister, Gyda Munk-Olsen. She is survived by her husband Ernest W. Moore of Havana, Fla., her sister-in-law Elsie Timmons of Gretna, Fla., her sister-in-law Martha Ann Moore of Havana, and one nephew Steen Halk Pedersen of Greve Strand, Zealand, Denmark.
At her request there will be no planned visitation or funeral service. She will be cremated and her remains stored in safekeeping for later entombment with her husband of fifty years.
Faith Funeral Home in Havana is in charge of arrangements