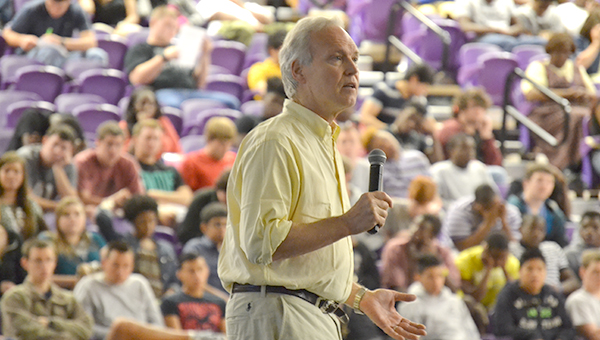 The Bainbridge gym was filled with students to listen to Reynolds speak about why smoking is deadly.

R.J. Reynolds was the famous owner and founder of a tobacco company that sold cigarette brands like Camel, Kool, Winston, Salem, Doral and Pall Mall made waves by making smoking cool.
But his grandson, Patrick Reynolds, is making waves by telling teens and children why its not.
“Smoking kills,” Reynolds said to hundreds of Bainbridge High School students Tuesday morning. “I know you have heard that before, but tobacco companies are targeting people your age to try and get you addicted to smoking.”
The event, co-sponsored by Memorial Hospital and Manor and the Decatur County School Foundation sought to educate the students about the dangers of smoking.
Reynolds explained to the students about the effects of cigarettes as a gateway drug into marijuana, cocaine and heroine. He showed slideshows about the dangerous effects of smoking that got loud reactions from students in the audience.
Between school appearances, Patrick Reynolds also visited the Bainbridge Rotary Club as guest of Memorial Hospital CEO Billy Walker, where he made some comments about his work with Tobaccofree.Org.
Reynolds said he believed the State of Georgia “gets an F grade” on its programs for tobacco prevention control, taxing and spending. Reynolds touted the benefits of imposing higher taxes on tobacco products and said Georgia has the lowest tobacco taxes of any of the surrounding states. In fact, it has the fourth lowest tobacco taxes in the country.
He said the American Lung Association has given Georgia state government an “F” for its low tobacco taxes, lack of smoking bans and lack of education advertising. They also get an “F” for cessation coverage.
On the positive side, support for curbing tobacco use continues and citizens are calling for strong local smokefree ordinances in Augusta and metro Atlanta areas. Georgia school districts, along with colleges and universities are prohibiting smoking campus-wide in increasing numbers. In these efforts of smokefree air, he gave the state a “C”.
He made note of the City of Bainbridge smoking ban in bars or restaurants, yet out in the county it is still permitted.
Reynolds was asked about the nature of his relationship with his family members, since he has begun speaking out against the family business. He replied, “That’s a very interesting question.  I divested myself of all tobacco stock in 1979. Before I spoke before Congress for the first time in 1986, I went to the family and told them what I planned to do. Some were upset and nervous about it. They were afraid I would embarrass the family.” Reynolds said he believed their worst fears were unfounded, that the stock didn’t go down and in all he felt people began to have more respect for the tobacco industry.
“I think they were more upset about the book I wrote,” he said with a laugh. He has penned what he called a “tell-all” book titled, The Gilded Leaf: Triumph Tragedy and Tobacco, in which he chronicles the excesses and escapades of three generations of the Reynolds family and what he calls the “declining old rich.”