Could major financial cuts be in city’s future? 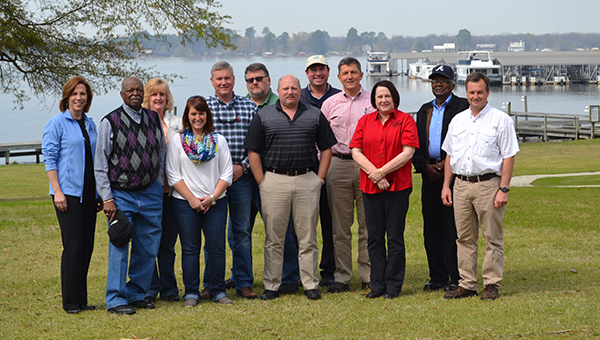 Members of city council and city operations stand together at Lake Blackshear.

The Bainbridge City Council met Friday and Saturday at the Lake Blackshear Resort and Golf Club for their annual retreat and discussions centered on one main theme — cutting expenses and raising revenue for the city.
City Manager Chris Hobby told the council Friday at the opening of the retreat they would work throughout the weekend to get the city’s financial footing in order and focus mainly on financial organization.
Gordon Maner of the University of Georgia’s Carl Vinson Institute of Government facilitated the council retreat, overseeing the discussions.
“We are not broke now,” Hobby told the council, department heads and mayor, “but now is the time to cut expenses so we do not get into a bad financial situation.”
Department heads, such as Roy Oliver with community development, gave full reports to the council about their expenditures and financial needs so that the council could discuss where to cut.
“Everything should be on the table,” Councilwoman Glennie Bench said about considering areas to cut funding.
According to Hobby one of the largest expenditures of the city is paying for employee health benefits, which make up more than 40 percent of spending.
Hobby and the council talked about the need to decrease spending for health benefits while finding a way to still care for employees. Mayor Edward Reynolds discussed the implantation of a citywide wellness program for employees that would work them on a one-on-one basis helping them meet health goals.
The council also came to a consensus to decrease meeting times from twice each month to once a month as earlier proposed in a council meeting in February.
After department heads presented the council with their projects, expenditures and needs, the council discussed more than 14 areas in which they could cut.
They discussed the possibility of increasing many fees including building fees, the gas base fee, water and sewer base charges, boot camp recreation program fees, commercial dumpster fees, public safety fines and water and sewer fees. There was also a discussion about creating a boat basin launch fee that would be free to residents of Bainbridge but honorary for any outside visitors utilizing the boat landings.
The council will discuss these items further in their meetings in April and vote to change fee prices, cut expenses and change the city’s financial course.

Putnal in the running for District 4 county seat