Could Canola be the next big thing for county farmers? 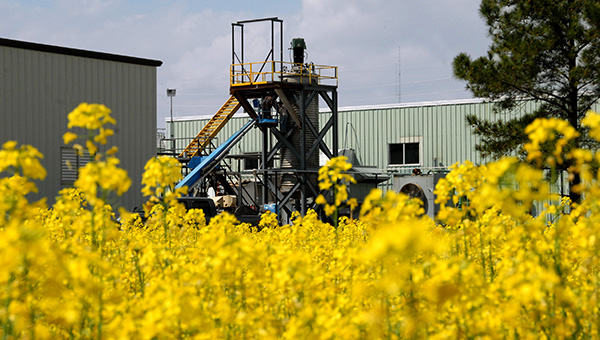 Drive through Decatur County farmer Greg Calhoun’s land this time of year and wander upon a sight unlike any other crop can yield this far south. It looks like fields of gold and to some farmers it might as well could be.
Throughout March and April, Calhoun is one of several farmers in the area branching into a new cash crop — Canola. While Canola itself is not new and the crop had a quick stint in the county several decades ago that never panned out, 600 acres of a new variety is being grown in Decatur County and Calhoun is excited about the potential.
Specifically, farmers are interested in growing the crop for local industry Meredian — a company in the developing stages holding patents to plastic that is fully biodegradable. Meredian creates PHA biopolymers that give plastics greater biodegradable characteristics and Fortune 100 companies are testing Meredian products to make everyday materials like coffee pods, detergent bottles and baby wipes have the ability to be thrown into the grown and virtually nonexistent in 60 to 90 days depending on soil conditions.
“Vegetable oil is the single largest cost to Meredian in the manufacturing process,” Michael E. Smith, Vice President of Meredian said.
And vegetable oil feeds bacteria that convert the carbon into biopolymers. Smith said any oil will feed the bacteria, but Canola oil can be grown locally and used to feed them as well.
“Meredian has decided to vertically integrate the supply chain by working with local farmers to establish an arrangement to grow canola and crush the seeds into oil,” Smith said. “This relationship will enable Meredian to vertically integrate the supply chain and will also help turn potentially fallow ground into a revenue generating winter crop for the farmers.”
Meridian is using the term, “agri-facturing” to describe their inventive process of taking local farm crop yields and feeding them directly into their manufacturing needs at Meridian.
Meridian has built an oil crushing facility adjacent to their current operation in the Decatur County Industrial Park that will have the capability of pumping oil generated from Canola seeds directly to the factory — hacking out the high cost of freight of Canola oil from other places. They purchased the Propex building and are turning into the seed crushing station.
“We are simply taking a product from the ground in Decatur county and making a polymer out of it.
“We decided to grow our own Canola because the process from taking it from a pellet to a seed is really simple,” Smith said.
Calhoun said the county currently has 600 acres planted now, but the seed crushing facility will have the capability to process close to 14,000 acres of the plant.
He hopes the county will plant more of the crop each year.
“When we farm Canola, we are truly farming year-round because we will be able to plant two crops without any yield reductions compared to double crop,” Calhoun said.
Calhoun explained that in April the Canola will be harvested and that will still allow farmers to put in cotton, soy beans, peanuts and other seasonal crops in behind it, there will be no lapse in time for those regular seasons, thus not giving crop reduction. Calhoun and other farmers are hoping the variety of Canola they are using will yield 40 percent oil and 50-65 bushels per acre.
As for a price range, Calhoun said it is too early to tell, because they must first see what percent of the seed crushings yield oil.
The same equipment is used to harvest and combine the Canola as wheat.
And there are more uses for this variety than selling bushels down the street to Meredian.
While the industry may not purchase all of the bushels of Canola, Calhoun said they are growing a non-genetically modified variety of the Canola so that it can be used as cooking oil and sold with a higher premium.
In April Calhoun will spray a chemical on the crop to dry it out and then harvest it for the seeds. But for now, the fields are golden and bright.
“It is by far the prettiest crop I have ever grown,” Calhoun said.