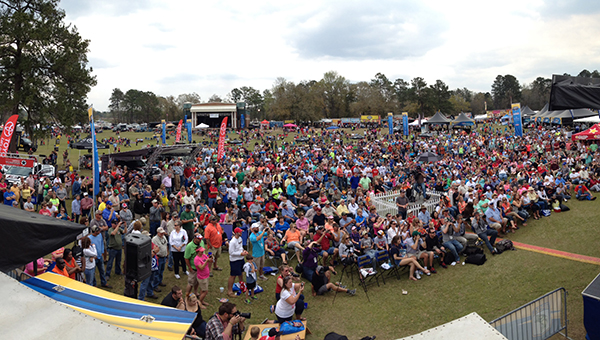 More than 26,000 people attended River Town Days throughout the weekend — most seeing Bainbridge for the first time. Above, a large crowd gathers Saturday for the Bassmaster Elite Series weigh in. — Adrienne Harrison

River Town Days was vastly larger this year with all the new facets added to the annual festival that included the professional bass fishing tournament and the Flames on the Flint BBQ contest.
The event, which kicked off Friday, hosted activities through Saturday, but all scheduled activities Sunday were cancelled due to the severe weather and torrential downpours.
Law enforcement officials who monitored the event estimated the Earle May Boat Basin saw crowds upwards of 26,000 during the three days combined.
Officers estimated they saw close to 1,000 participants come to events Thursday, 5,000 attend events Friday night and more than 20,000 attend the events Saturday — which included a Bassmaster Elite Series Tournament weigh-in and concerts throughout the day by the Michael Miller Band, rising country star Jacob Powell and local musician from Americus, Brandon Vann.
Musical headliner for the weekend, Chris Cagle, arrived to the boat basin, but was unable to perform after a reported illness. The Michael Miller Band from Tallahassee, Fla. who had played earlier Saturday afternoon, stepped up to carry the entertainment Saturday night.
While the next appearance of another Bassmaster tournament at River Town Days is unknown, organizers said the Flames on the Flint BBQ competition was such a success it will become a fixture for River Town Days to come.
More than 40 teams competed in the event which was sanctioned by the Kansas City Barbeque Society — meaning it brought with it teams that compete professionally and are well known.
“From what many of the participants have told me, next year we hope the competition will be even better,” Ronnie Godwin, chairman of the Flames on the Flint BBQ competition, said after the weekend. “We have had about two thirds of our teams commit to coming back next year.”
Godwin said the teams, who travelled from places as far as Oklahoma and New Jersey, were constantly doting on the location of the competition and enjoyed the atmosphere and surroundings.
“From everything I have heard, next year we could have as many as 75 teams,” Godwin said.
Some of the better-known teams that competed over the weekend included the 88-time grand champion Lotta Bull BBQ from Marietta, Ok. and Killer B’s BBQ from Evans, Ga. — a team that was named the Sam’s Club National Champion.
The Checkered Pig team from Martinsville, Va. won the overall competition for the weekend. Father and son team Tommy and Hunter Houston said Bainbridge can expect a return visit from their team next year and they were complimentary of their Bainbridge experience.
“The promoters of this event did a better job than most of the promoters of the events we go to,” Tommy Houston said. “It was awesome here and we are planning on coming back.”
The competition included four categories of pork, brisket, chicken and ribs. A full list of winners for each category can be found on flamesontheflint.com. Local teams that competed included Memorial Hospital, which placed in 17th for the brisket competition, and the Blue Line BBQ team, made up of volunteers from the Decatur County Sheriff’s Department.
River Town Days Chairman Jeff Findley said overall the weekend went smoothly with the help of a great volunteer committee and hard working staff members from the Bainbridge Decatur Chamber of Commerce.
“I think this will be one of the ages,” Findley said of River Town Days. “Although we had some hiccups during the event, everything went smoothly and it went as well as we could have hoped for.”
Findley said with attendance numbers, their volunteers and organizers did not know what to expect because they had never had an event of this level.
“But we are very happy that this many people came out and many of the attendees were able to experience Bainbridge for the first time this weekend,” Findley said.
Adrienne Harrison with the Bainrbidge Convention and Visitors Bureau said this was the first event of this size and this nature for Bainbridge. Harrison too said because the help organizers received from volunteers, the Bainbridge Public Safety Department and the Decatur County Sheriff’s Department, the weekend was successful.
Harrison said more than 60 vendors participated in the event, which is slightly more than last year where there were more than 40 vendors.

Angler in home waters feels the pressure for a…