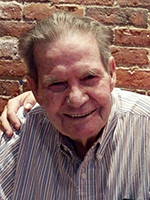 A memorial service will be held for James “Jim – JW” Laing, 82, of Mt. Pleasant, S.C. at 11 a.m. on March 15, 2014 at St. Joseph Catholic Church in Bainbridge, with Father David Hamm conducting the service. Burial will be at Pisgah Cemetery, Climax.
Mr. Laing passed away at his home on Jan. 29, 2014. He was born on Sept. 23, 1931, in Climax, Ga. to the late Johnnie Green Laing and Lillie Belle Broadway Laing. He was preceded in death by his wife Elisabeth; son Jimmy Laing; daughter Terry Laing; brother Tom Laing; and sister Pat Moore Laing.
Mr. Laing is survived by two daughters Debbie Laing Rout and husband Dave of Montross, Va., and Sharon Laing Kirby and husband Royal of Harrington, Dela.; daughter-in-law Denise Backherms Laing of Mt. Pleasant, S.C.; seven grandchildren and one great-grandchild; a brother Charlie Laing of Bainbridge; two sisters, Evelyn Jones of Bainbridge and Marie McGraw and husband Vince of Clarks Summit, Pa.
He was a U.S. Army veteran having served during the Korean War in Germany, where he met and married his wife of 52 years, Liz. After discharge from the Army they lived for a short time in South Florida before moving to Northern Virginia. He was a construction superintendent working in Washington, DC. and worked on many well-known buildings including Union Station and the US Treasury Building. He retired from Grunley Walsh Construction Company in 1980.
He was an avid fisherman always looking for the big one.
Family and friends will be received following the service at the home of Charlie Laing in Bainbridge. All are welcome.