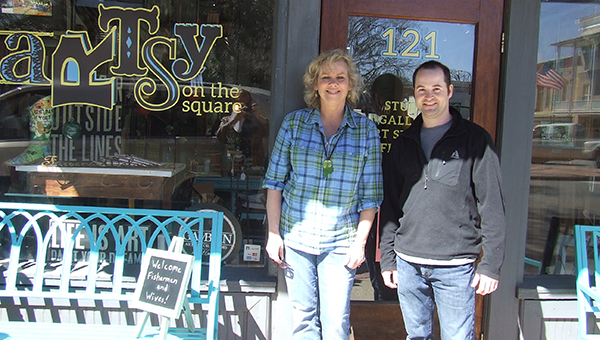 Bainbridge’s downtown is experiencing a revival and Vickie Bailey is doing her part with the opening of her Artsy on the Square shop located at 121 West Street.
The building was formerly renovated and occupied by Susan’s Sweets, then sat vacant for several years. It has now been totally renovated and become an arts shop, selling art supplies, frames and artwork from area artists. But it is so much more than that.
There are many novelty items for your home or garden, pottery, and jewelry, even ties for men.
Bailey said she has tried to make the inventory regional, or at least made in America; but she also has added some fair trade items, such as the Haitian metal art forms and jewelry from India and Guatemala. These industries provide jobs to those living in third world countries.
Vickie said she was inspired after deciding to move her art studio from her home to downtown in hopes she would get more accomplished. As she sat there painting she began to visualize what an arts store would look like. Next thing she knew she was putting it all together.
She has left the brick walls exposed and hand painted and stenciled the floor.
The exterior invites one to come inside, then sit a spell on the benches and enjoy the view of Willis Park.
It has become a gathering place as she has inspired others to bring in their art pieces. Ralph Jones has placed some of the up-cycled furniture he makes from odd and ends pieces.
Local artist Ashley Long happened to notice Vickie working on the shop and began stopping in to talk and help out. Now, he is very much involved in the business. He has artwork on display and is the shopkeeper when Vickie is away.
In addition to Bailey and Long, artists Ann Rudd and John Bayides have work displayed there.
Vickie said she has been involved with a group working to update the downtown area and she wants to do her part to turn it into an art community. She hints at additional shops on the horizon. 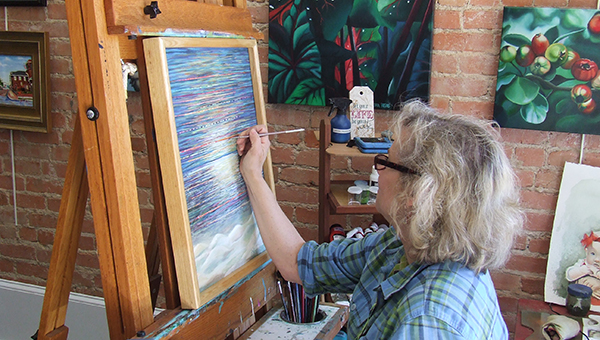 Vickie Bailey, above, paints in her new store downtown Artsy on the Square. Bailey will sell art supplies, gifts and more.

Animal shelter volunteers lock themselves up