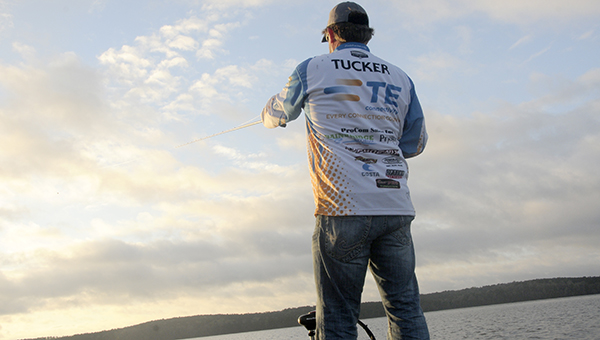 Angler JTodd Tucker fishes the waters of Lake Seminole early Wednesday morning in the Bass Elite Series practice rounds. Tucker who grew up on the lake and is sponsored by the City of Bainbridge said he is hoping for a win in a tournament so close to home. — Powell Cobb

The early morning is cloudy and windy. An orange sun rises and peeks out from between grey clouds, but quickly disappears.
For all of 12 minutes, the sun’s bright rays reflect off of an angler’s polarized sunglasses. He casts line after line out into Seminole Lake during the final round of practice for the Bassmaster Elite Series. His uniform is illuminated, the orange and blue details standing out. In bold, black letters reads his name on the back of his jersey: TUCKER.
“I’ve been fishing this lake since I was 10,” he says. He was raised on it. He’s fished it for the last 30 years. It feels like home.
But JTodd Tucker also feels expectations weighing on him. Nobody competing in the Bassmaster Elite Series knows this lake better than him. Does he feel the pressure?
He nods his head. “There’s definitely some pressure,” he says. “I feel like everybody is looking at me.”
Friday afternoon, Tucker walked on stage shaking his head as he placed his sack of fish on the stand to be weighed. He wasn’t confident he made the cut for the top 50 anglers to fish in round three of the Bassmaster Elite Series. But he held his head high and thanked the crowd for being there.
“It’s great to be here and see everybody here,” he says with a genuine smile on face. “It’s great to have Bainbridge as a sponsor. I appreciate y’all coming. I don’t think I’ll get back up here again, so I’ll see y’all out at the fair.”
But Tucker will get another shot out on Lake Seminole. He barely made the cut after the other 107 anglers weighed in. He sits at 49th place, right on the edge.
Tucker has gotten this far in his pro fishing career due to a lot of things. But above all, he looks back on the support his family has given him.
“They stuck it through when times were terrible, helped me out when I needed it,” he says during practice Wednesday. “Without them, I never could have stayed in the game, you know?” He pauses for a few seconds, listening to the soft splash of the water on the boat. Then he chuckles. “Without my sponsors I couldn’t do it anyway.”
Before Tucker joined the tour, he raised quail for 10 years on Southern Woods plantation in Sylvester. His boss let him leave whenever he needed and eventually gave him the time to qualify to become a pro.
He thanks B.A.S.S. and the media exposure he’s gained through them. People recognize his scruffy face and happy grin. They see him on the road or at gas stations.
“I don’t get that as often as Kevin VanDam and some of them, but yeah I have had people recognize me,” he says. “With people’s exposure to media these days, you can get more of that. It gives us a platform that we never really had before.”
And then there’s Tucker’s father, the man who introduced him to Lake Seminole.
The list goes on and on, and Tucker isn’t shy about sharing the people that gave him stepping-stones to get to this Bassmaster Elite Series. When it comes down to it, though, Tucker is looking for a boost.
“Winning this would just help build my confidence,” he says. “You need a pat on the back from time to time to keep you going.”