More than a hundred of the greatest anglers in the country took to Lake Seminole early Thursday morning for the opening round of the Bassmaster Elite Series. They returned to the Earle May Boat Basin at 4 p.m. to weigh in their catches and kick off the tournament with a bang.

Weight leader for round one is Shaw E. Grisby of Gainesville, Fla., with a total 30 pounds five ounces. 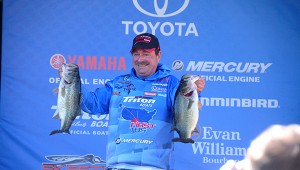 Shawn E. Grigsby reeled in the mother load Thursday with 30 pounds five ounces of bass, giving him the lead going into round two. — Powell Cobb

Bernie Shultz, also of Gainesville, Fla., hooked the largest bass of the day and is the Carhartt Big Bass Leader with a 10 pound 10 ounce behemoth. He has claimed the second place spot for the tournament so far. 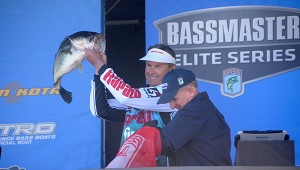 Bernie Shultz had the biggest catch of the day, a 10 pound 10 ounce bass. — Powell Cobb

Check in tomorrow for results for round two.