Two Tallahassee residents have been arrested for using counterfeit money at Bainbridge stores.
Tyrone Hill, 40, and Consuelo Ratliffe, 39, made purchases at The Winery, CVS, Raceway, Family Dollar and other stores with $50 bills printed on washed-over $10 bills. 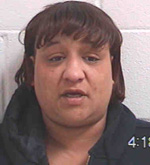 Bainbridge Public Safety Investigator Chip Nix is part of the ongoing investigation into what might be a bigger counterfeiting operation.
“So far, those are the (bills) we’ve collected,” Nix said. “We are pursuing other ways to maybe add more counts onto the indictment.”
BPS received a call last Tuesday evening from a Hardee’s cashier who said Hill and Ratliffe tried to make a purchase with a $50 bill he believed to be a fake.
After indentifying the car Hill and Ratliffe were in, officers found the vehicle parked in the Fred’s parking lot on Shotwell Street. As they approached the car, they saw Hill inside and asked for him to step out of the vehicle. In response, he put the car in gear and sped out of the parking lot.
“He was driving at high speeds, so they broke it off and issued a ‘be on the lookout’ to other agencies,” Nix said. “Once they broke it off, they gave a description and everything to officers from Georgia State Patrol along with Whigham Police Department and Grady County Sheriffs Office. They got involved in a high-speed chase.”
The chase ended in Grady County when Hill wrecked his vehicle. After checking in at Thomasville Hospital, he was transported back to Bainbridge for booking and further interviews.
Ratliffe was arrested inside Fred’s and charged with forgery in the first degree.
Nix’s research on the case is being sent to the Secret Service branch in Tallahassee for further investigation into the source of the counterfeit bills. 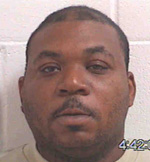 Nix advised business owners to be cautious when accepting large bills for small purchases.
“You need to be leery of the quality of the paper,” he said. “They’re trying to make it harder and harder for people to counterfeit money. If you’re some sort of businessperson, you should browse through any money to make sure the serial numbers are not duplicated.”
Hill and Ratliffe are currently booked at the Decatur County Jail.