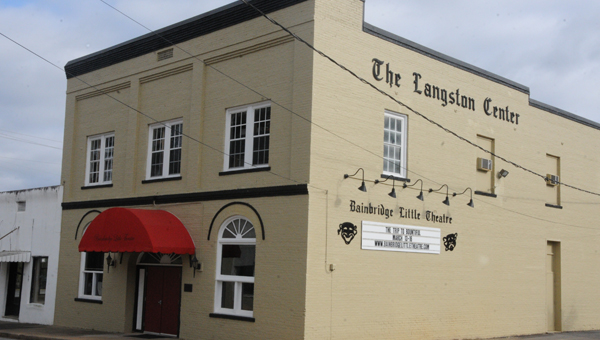 BLT veteran actor, director, set designer, teacher, builder, student, musician, and all-round artist, Thaddeus Nifong, has applied his talents to a complete renovation of the BLT lobby, and is paying tribute to his parents, Bud and Wanda Nifong, by dedicating the project to their memory.
Those who come to see the upcoming BLT production, “The Trip to Bountiful,” (March 13-16), will be greeted with a whole new look.
Nifong said he has long wanted to create something to honor his parents. Then, it occurred to him how badly the lobby needed to be renovated, and he was off and running.
He began the process six weeks ago, and told everyone involved it had to be completed by Monday, March 10, before The Trip to Bountiful opens. So far, he is on schedule.
The old lobby was gutted. Everything, including the stands for the lighting, was removed and all the old furniture disposed of.
The walls have been repainted, the tile flooring cleaned and resealed. The old ceiling has been taken out and new lighting fixtures have been installed.
Perhaps the biggest addition that will mean the most to theater goers is the addition of a one-window ticket counter, complete with a computer. Nifong said the ticket pick-up process has always been confusing to people, as there was no designated ticket counter.
The lighting stand has been rebuilt into a four-door storage unit, with a hidden ladder that pulls down for easy access.
On the other side of the lobby there will be a small seating area with two upholstered chairs and a chest.
Finishing touches include chandeliers of brushed brass with crystal beads.
Nifong comments on the lives of his parents and how they were extremely supportive of his artistic interests — attending his school plays, band and choral performances. He speaks of how they introduced him to concerts, symphonies and church choir performances.
“They were great parents, and even though we did not always see eye to eye, in the end I am lucky to have known them and gained wisdom from their knowledge,” Nifong said.
He outlines how the two met in North Carolina as high school sweethearts, and how their declared love survived his father’s absence during WWII.
Before he left he purchased a ring, which he paid on for three years, and promised when he returned they would marry.
The two went together to further their education and received their associate degrees from Brevard College in 1948.
His father went on to receive his Bachelor of Science in Agriculture Education in 1950 from the University of Florida, taught agriculture in Plant City High School and later received a Master of Science in Education.
He became an administrator in the Hillsborough County School System.
His mother was a housewife, mother and substitute teacher while pursuing her Bachelor’s degree in Art Education from the University of South Florida.
She graduated in 1980 and began teaching drawing, pottery and painting at Plant City High School.
He credits his mother with his artistic abilities and his father for his building knowledge.
“My father liked to build things and I learned a lot from helping and observing,” Nifong said.
He also plans to place some of his mother’s artwork on loan for display in the lobby.
Nifong is currently a student at Valdosta State University, working toward his Master’s in Speech Communication.
He expects to graduate in May. He also teaches a first year experience course at Bainbridge State College, where information is given to help incoming freshmen and non-traditional students how to survive and thrive in college.

The final beam: Construction at JWE closer to finish