A supervisor at the Decatur County Prison was arrested Wednesday for having sexual relationships with more than one inmate.

Latoya Biggles, an employee of Trinity Food Service who worked at the prison as a part-time dietician and nutrition supervisor, admitted to having sex with inmates after officials caught her in the act with hidden surveillance cameras they set up.

Biggles, 29, is a resident of Bainbridge and had been working at the prison for the last four months.

Decatur County Prison Warden Elijah McCoy said he got word from an informant about Biggles’ engagement in sexual activity with multiple inmates. McCoy said he tells employees upon arrival about the dangers of working closely with inmates. He said he encourages employees to come forward and report inmates who approach employees in a sexual way.

“Every time we hire someone, whether it’s male or female, we talk one-on-one to give them the dos and don’ts so they don’t get caught up with any of these inmates,” McCoy said. “I remember specifically speaking to her about four months ago. I said these guys are going to come at you, you got to report it to your supervisor. I don’t care if your report it 50 times a day, tell it, tell it, tell it. If you don’t, they’re going to keep coming at you.”

McCoy placed hidden surveillance cameras in the dry food storage room where Biggles and the inmates were having sex.

Biggles worked alongside inmates, supervising the preparation of meals each morning before 6 a.m.

Tuesday between 4:30 a.m. and 5 a.m. camera footage from the bread room and dry food storage pantry showed Biggles and an inmate locking the door and having sex. 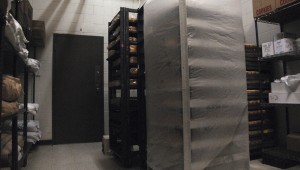 McCoy said after reviewing the footage he called his supervisors with the state corrections department to investigate the affair.

Biggles confessed to having sex with an inmate  –  different from the one she was caught on cameras with when officials interviewed her.

Based on her confession, Biggles is charged with one count of sexual assault and further charges are pending.

“If you are a visitor or an employee, if you have sex with an inmate you could be charged with sexual assault,” McCoy said. “That is the law.”

Biggles will also have to register as a sex offender.

McCoy said the sexual assault charge is standard for anyone who supervises inmates and has sex with them, regardless if the relationship was consensual.

A bond for Biggles is not yet set. She is currently being held in the Decatur County Jail.