The final beam: Construction at JWE closer to finish 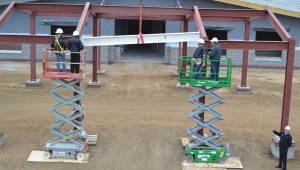 There was one last beam that needed to be welded into place at Jones Wheat Elementary School Tuesday before the school can be completed in the following five months. The beam, signed by all the students and teachers at Jones Wheat, was lifted into place by a crane and fixed into place by school officials Tuesday morning who then toured the facility and its progress since the school broke ground in September.
After the beam was lowered into place and secured at the front entrance of the school, several engineers and architects led school instructors and officials through the new building — which mostly consists of cinder block and metal-frame skeleton.
Jerry Mills, the maintenance director for Decatur County Schools said the new Jones Wheat will have the latest and greatest when it comes to safety and technology.
“This school is a mirror image of the new West Bainbridge Elementary but we have made a few changes,” Mills said. “We will have more efficient lighting with LED lights that use less power and a more efficient air conditioning system than the one in the old Jones Wheat building.”
The previous Jones Wheat building was built in 1954 and faced Broughton Street. The new building will face Shotwell Street — the main thoroughfare through Bainbridge.
Longtime Jones Wheat Principal Dr. Larry Clark said that is one aspect to the new building he is thrilled about and said the change would be positive for parents and students.
Most notably the safety features for the new building were brought up to the most recent state standards and include some unique modifications like a pressurized gym that doubles as a shelter and a roof that can withstand a hurricane.
“Decatur County always builds their schools to the standard and beyond,” architect Keith Barrett said about the safety features, which bring the school up to date and up to code.
Barrett said the gym is pressurized due to the school’s proximity to the fueling station just off of Shotwell Street less than one mile away.
“That way if there were to be an incident or wreck at the fueling station,” Barrett said. “We could bring all of the students in here rather than evacuating them out and putting them at greater risk.”
Barrett and Mills said the roof of the school could withstand 110 mph winds — a code requirement due to the county’s close proximity to coastal hurricanes.
The school windows are made from material that would “safely shatter” in case an incident occurred on Shotwell Street, just feet away from the school.
School officials and construction workers aim to have the school move-in ready in July prior to the school year beginning in August.