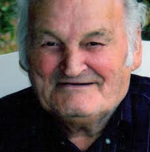 Orris I. “Smitty” Smith, 79, of Bainbridge, passed away Monday, Feb. 24, 2014 in Decatur County.
The funeral service will be held at 2 p.m. on Thursday, Feb. 27, 2014 at Ivey Funeral Home Chapel with Rev. Charles Reese officiating. Interment will be at Oak City Cemetery with Rich Houston, Chris Crane, Wayne Donalson, Keith Sandefur, and Victor Strickland serving as active pallbearers.
Honorary pallbearers will be George Strickland, III, Larry Strickland, George Sandefur, Pete Warren, Steven Meredith, and Jimmy Samuels.
The family will receive friends from 6 to 7:30 p.m. on Wednesday, at Ivey Funeral Home. Memorial donations may be made to the American Cancer Society, 323 Pine Ave Ste. 100, Albany, GA 31701.
Mr. Smith was born Aug. 14, 1934 in Climax, the son of Charles Madison Smith and William Lettie Miller Smith. He was a veteran of the United States Navy, serving during the Korean War and retired after many years as theowner and operator of AAA Refrigeration.
Mr. Smith was a member of VFW Post #4904 and was of the Assembly of God faith. He will always be remembered as a man who never met a stranger.
He was preceded in death by his son, Matt Smith.
Survivors include his wife of 56 years, Ann Smith of Bainbridge; his
sons, Lewis Smith and his wife, Carla, of Bainbridge, and Greg Smith of
Atlanta; his siblings, Ken Smith of Orlando, Fla. and Ann Darling of New
York City, N.Y.; his five grandchildren; his 18 great-grandchildren; the apple of
Smitty’s eye his great niece, Carli; his niece, Julie Houston; and his
special dogs, Rosie and Buddy.
Ivey Funeral Home is in charge of arrangements.