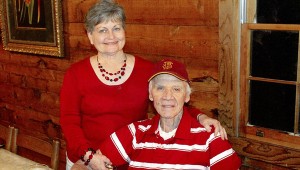 William Widener, shown here with his wife Beverly Limb Widener, will be inducted into the Decatur County Sports Hall of Fame Saturday, March 1.

William Widener, son of the late Lee Vesta Widener and the late Mae Dee Harrell Widener, was an outstanding athlete and musician at Bainbridge High School. He went on to great heights as a band director and Bainbridge swim coach.
A 1956 Bainbridge High School graduate, Widener, who is married to Beverly Lamb Widener, won the region pole vault and high jump championships with the BHS track and field team in 1956. His winning pole vault was 12 feet and his winning high jump was 6 feet.
He was city of Bainbridge Recreation Department swim coach swimming instructor, water safety instructor, lifeguard, pool manager, swimming and diving instructor and meet director for all home meets from 1953 to 1980.
Widener also organized the first Bainbridge swim team and swim club in 1954 and the first parents and booster swim club in 1955. He organized the annual Inland Port Meet in 1964 and developed and coached several hundred All State swimmers from the Bainbridge Recreation Department and Bainbridge Decatur County YMCA.
Thousands of young people have participated in his aquatic programs. He taught swimming classes for adults and toddlers at Bainbridge State College from 1980 to 1983.
Widener’s years as a musician and Bainbridge High School Band director are equally impressive.
He was a member of the District Honor Band, the Georgia All State Band, the National Future Farmers of America (FFA) Band, and the Georgia All State Orchestra. He also won first place in the male vocal quartet at the literary meet in 1956.
He earned a Florida State University School of Music scholarship. While there, he was a member of the university’s award winning Marching Chiefs Band and all instrumental ensembles. He earned a bachelor of music education degree from FSU.
Before returning home to become the Bainbridge High School band director, Widener was band director in Melbourne, Fla., from 1960 to 1962. He retired in 1992.
His former tuba player and McDonald’s All-American Band member Bobby Durham performed in the Macy’s Thanksgiving Day Parade and the Rose Parade. Durham, who went on to play in the University of Southern Mississippi Band, and now is a professional musician.
Widener was Decatur County STAR Teacher of the Year in 1978 and a Decatur County Man of the Year finalist in 1982. His brothers and sisters include the late Leonard, Newton Widener, the late retired Lieutenant Commander Harrell Lee Widener, Mary Ruth Widener Gilliam and Betty Widener Elkins.
Editor’s Note-This is the third of four articles, on people who will be inducted into the Decatur County Sports Hall of Fame Saturday, March 1, at the Bainbridge State College Kirbo Center. Tickets are $20 and are available at the Kirbo Center. Grimsley Pharmacy Center, Parker Paint and Decorating Center and Action GMC.