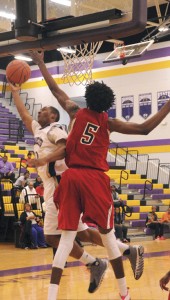 Senior forward Dominic Douglas charges past a Northside Columbus defender to put the ball in the basket. — Powell Cobb

It came down to the final seconds.
The Bearcats had a six-point lead against the Northside Columbus Patriots going into the fourth quarter. The Patriots’ offense became aggressive. A layup and a free throw in the final seconds of the game brought them back up for their 64-62 win for the region 1-AAAAA championship title.
Sophomore guard Devontae Jones tried for an off-balanced jumper right as the buzzer rang, but missed.
“We fought and we came back to take the lead,” sophomore guard Tyree Crump said. “I guess we got a little comfortable because we thought the game was over. They played hard and came back.”
Crump had 24 points on the night. Behind him was Jones with 11 points.
Despite the loss, the Bearcats are heading to the Class AAAAA state championship. They play their quarterfinal game Saturday against Bradwell Institute at 6 p.m. in the Bainbridge gym.
The Bearcats reached Monday’s championship game against the Patriots with a 52-40 victory over the Hardaway High School Golden Hawks Saturday.
Crump led the Bearcats against the Golden Hawks. He poured in 32 points, 20 of which came in the second half.
The Bearcats jumped out to a quick 5-0 lead with a layup off the left glass and a free throw by Stephen Johnson with just 15 seconds gone in the game and a layup off the right glass by Trevon Shaw at the 6:10 mark of the first quarter.
The Golden Hawks bounced back to go up 6-5 on a jumper by Justin Crawford at the 2:48 mark of the first quarter. A layup off the right glass by Devontae Jones with 1:38 remaining gave the Bearcats a four-point lead at 10-6. A jumper from the left side by Crawford cut the advantage to 10-8 at the end of the first quarter.
A three point jumper from the left side by Myles Thomas with 1:42 left in the second quarter put the Bearcats up to stay 20-18. They led 25-20 at halftime and 46-31 after three quarters.
A layup by Shaw with 2:52 remaining in the game put the Bearcats up by 17 at 51-34.
Behind Crump in the Bearcats scoring column Saturday were Devontae Jones and Stephen Johnson with 8 points apiece. Trevon Shaw added 6 and Myles Thomas put in 5.
After Saturday’s win over Hardaway, Bearcats coach Rickey McCullough said an adjustment he made at halftime helped Crump get open for more shots in the second half against Hardaway.
“Hardaway came out in a diamond and one defense and held Crump to just two first half points,” McCullough said. “He got hot in the second half after we adjusted our offense.”

The young faces in professional sports are replacing many…