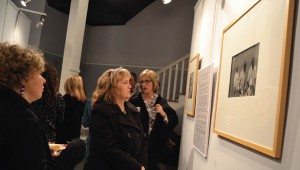 Decatur County residents had the opportunity to explore the vision of Decatur County through artist Paul Kwilecki’s eyes Thursday night at the opening of his show. — Ashley Johnson

Thursday the Firehouse Gallery hosted the grand opening of the Paul Kwilecki photography show that will run through March 2.
Visitors were treated with the chance to talk to Kwilecki family members, wine and dine and view many of the Kwilecki photographs from his latest work before his death, “One Place” hanging in the gallery.
As viewers moved through the vibrantly talkative gallery full of photos, family members hoped they would take away one thing — that the late Paul Kwilecki was dedicated and passionate about Decatur County.
“I just hope they take away that Daddy was a very talented documentary photographer and had a true understanding of people in Bainbridge — their trials and tribulations — and he respected them,” Frances Kwilecki, Paul’s daughter said.
Frances said of all the photographs, the photos of the angel from the Oak City Cemetery resonate with her the most — the emotion, the realness and the story behind the angel, which is told in the book, “One Place.”
As for his photography style, Frances said, “it was life in the raw and showed what things looked like at that time.”
But the buzz Thursday in the room was around the simple fact Kwilecki’s artwork was hanging — it was that it was hanging in a local show in a gallery he fought to keep alive.
“Unlike the exhibits in New Orleans and other places, this one is different,” Kwilecki’s younger daughter Elizabeth Whaley, said. “This is his hometown and these are his people and this is a celebration of his life and my mother’s life — because without my mother none of this would be possible.”
Former friend of Kwilecki’s and artist Lynda Todaro said while walking through the gallery Thursday she felt something special.
“I just felt like Paul was here tonight — I could just sense his presence,” Todaro said.
Kwilecki spearheaded attempts to save the Firehouse Gallery when years ago city officials had plans to tear it down when it was not being utilized. Kwilecki championed efforts to find a place in the city where art could go on display.
Now, after his death, Kwilecki’s art is on display in the gallery.
“We all loved Paul and he just did his own thing and was very unassuming,” Todaro said. “I feel like he didn’t get the credit that was due to him and this wonderful turnout tonight just verifies that.”