Elderly couple tries to stay above water, gets no help 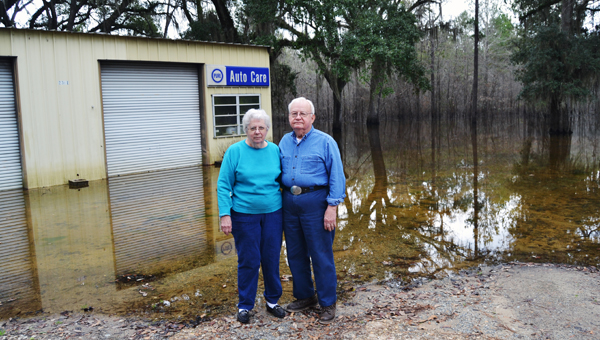 Larry and Wylene Harrison stand in front of their Auto Care shop on their flooded property. According to the Harrisons, all their property inside the shop has been ruined from water damage.

Fourmile Creek winds through the woods for miles in the southwest corner of Decatur County, serving as main tributary for the Flint River. Not all the water is flowing there, though.
Larry and Wylene Harrison recently cut down a tree in their yard to create a new path for their car. More than a foot of standing water is covering the driveway they once used. An overflow from Fourmile Creek has turned their property into a shallow pond, and the Harrisons are searching for help.
Larry’s mechanic shop, directly next door to their house and once a location for loyal customers to have their cars fixed, is swamped. Most of the equipment inside is ruined. The Harrison’s have been living in their home on Fowsltown Road for more than 30 years. This is the sixth time their business has been flooded.

“It’s ruined everything that was in the shop,” Wylene said. “It is nothing to anyone other than Larry and I, but that’s our living.”
Former Decatur County administrator Tom Patton installed floodgates into a culvert on the creek to help regulate the amount of water passing through. When the gates were closed, there was less water diverting onto the Harrison’s property. This kept them dry for the majority of the year.
Current Decatur County Administrator Gary Breedlove proposed removing the gates, citing a law that states water is not allowed to be diverted from anything other than its natural path. The gates’ stoppage, combined with up to 14 inches of rainfall in Decatur County in 2013, created an overflow onto Country Club Road.
“Last year at one of our meetings, it was brought up that we couldn’t restrict the natural flow of the water, so we voted to open that gate,” Decatur County commissioner Jan Godwin said, who is the commissioner for the Harrison’s district. “Now the water goes through.”
According to the Harrisons, the open gate and beaver dams along the creek are the culprits for what is stopping up the water and overflowing their property.
Mark Pirrung owns the land that backs up to the Harrison’s. Pirrung is based in Atlanta, but farms the property he said has always been a swamp. Known as Fowlstown Swamp in old record books, Pirrung said there has always been a high water level there, but he worked with the county three years ago to alleviate some of the flooding due to beavers.
“Our discussions with the county were about getting the channel on Fourmile Creek opened,” Pirrung said. “We also talked to the county about eradicating the beaver problem and they were helpful in that.”
Pirrung said that once the county helped trap beavers in that area, they did not follow up and help fix the damage and dams the beavers left behind. Pirrung said he has lost some timberland from the flooding and the rising water has flooded a lot of places where we had standing timber.
“We would be happy to cooperate in any way we can to help solve (Mr. Harrison’s) problems or anyone else’s in that area, but it is going to take cooperation amongst a lot of parties to get this done,” Pirrung said.
Bert Steen, a retired soil conservationist, tried to get involved with the issue and eradicate the problem last year.
“What we’ve been told is that Fourmile Creek is dammed up with beaver dams,” Godwin said. “Last year, Bert Steen offered to go on the Pirrung property and break them up. He was going to get permission and (the county) indicated he could do that.”
Steen tried, but was given a cease and desist letter from Pirrung’s lawyer, Larry Harrison said.
Now, the Harrison’s are in the process of figuring out what to do next. They hire a man to spray their property once a week for mosquitoes, worrying what the environment will be like when the weather gets warmer.
Breedlove said though he acknowledges the Harrison’s circumstances, there wasn’t much the he could do for them seeing as how there are other responsibilities Decatur County is focusing on.
“What do you do on private property as it relates to your official obligations on public property, which is 675 miles of county-maintained roads?” he said, noting the Harrison’s property lies within a FEMA identified flood zone. “We’re probably going to write a letter to Mr. Pirrung encouraging him to clean the beaver dams, if there are beaver dams.”
Larry said he has spoken about the severity of his property’s flooding problems on to county officials. But Wylene said no officials from Decatur County have come to talk to them directly about their issues.
“It’s just unreal to me how we’ve been treated,” she said.