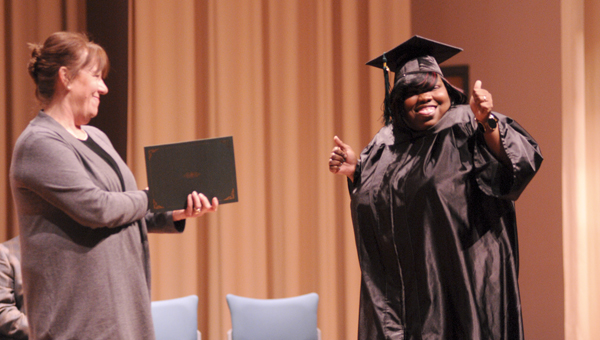 Sixty-six graduates walked across the stage to receive their hard-earned diplomas during the GED graduation at Bainbridge State College.

A large and cheering crowd of relatives and friends filled the Kirbo Center with shouts of “I love you” and praises on Thursday evening as each of the 66 GED graduates walked across the stage to claim their hard-earned prize — a high school graduation equivalency certificate.
No doubt each of the students has a story to tell  — of how they left school and returned to earn their GED; but four came forward to the podium and gave emotional testimonials of the obstacles they had overcome.
Taniya Bowens, age 34, began her speech with a tearful statement, “I stand here tonight with love.” She went on to tell her story. Two years ago she had gone online and signed up with a school she saw advertised and paid $789 for online courses to obtain her diploma, only to find out it was not an accredited program. “I could not go to any college with it. That motivated me to come to Bainbridge State College to get my GED.” she explained. She said it was very hard for her, but her husband pushed her every day to get up and go study.
She is now taking accredited on-line coursework to obtain an education in insurance billing.
Kayla Heisler said she had dropped out of high school at age 17 because there were just too many distractions there and it was hard for her to concentrate. She said studying for the GED was also very challenging, but the one-on-one attention she received from the instructors and the encouragement from the staff made it easier. She has enrolled at Bainbridge State College to continue her studies. She wants to become a physical therapist.
Next up was Amanda Fearrington, a 25-year-old mother of an 8-year-old son, Quen. She said she dropped out of school at 17, and found her mother’s admonition to be true, that she would regret her decision. She was eventually inspired to go back and get her GED because she wanted to be able to provide the best for her son. She is registered to start classes in May at Bainbridge State College to pursue a nursing degree.
Perhaps one of the most difficult and inspiring stories came from Frederick West, 27, who told how he enrolled in GED classes seven years ago, but wasn’t serious about it. “I was going in circles and ended up in a place I didn’t want to be.” He explained he was incarcerated for 17 months and resumed his studies while in jail.
His former teacher Lorraine Hamlin said she has a special relationship with Frederick. When she began seeing his essays and papers come in to the office she realized why he no longer attended class, and she would write encouraging notes to him on the margins and send them back.
Frederick said he completed four of the required tests while in jail, but had problems with math. When he was released he re-enrolled in Adult Education, then relocated to Albany, where he passed his last math test Dec. 30, 2013. “I never gave up. I always had my sights set on getting my GED.”
He said his goal is to live up to a quote from Martin Luther King, Jr., “Intelligence plus character is the goal of a true education.”
West is now enrolled at Albany Technology College in a welding program.
Debbie McIntyre, director of Adult Education at Bainbridge State, met with the class just before they filed in for the opening ceremony and told them in all her years she has never been happier or more proud of this class and what they have accomplished.
Keynote speaker was Dr. Tanya Strickland, Vice President for Academic Affairs at Bainbridge State, who urged the grads to think of this evening as a milestone and a steppingstone. “This is a huge accomplishment and a gateway, or path on the road to success.”
She encouraged them to develop a personal mission statement for their lives, and closed with a quote from famed children’s author, Dr. Seuss. “You have a brain in your head and feet in your shoes so you can steer yourself in any direction you choose.”
The GED program is comprised of five separate tests each measuring achievement in course content comparable to that taught in high schools. The five fields are Reading, Writing, Math, Science and Social Studies. The student must pass each individual test with a minimum of 410 per test, with an average of 450 per test, and reach a total overall score of 2250 to graduate.
There were eight students who scored 2700 and over, making them honor students.