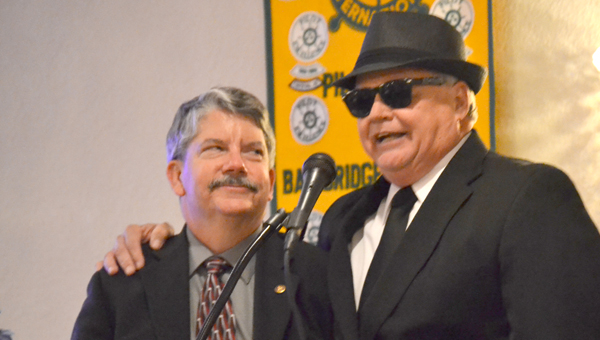 Dr. Robinson, left, is roasted by Rev. Randy Mosley, who dressed in his entrance as a Blues Brother. Mosley was roasted and jabbed at by friends and family for the duration of the night.

A night of good-natured humor did not hesitate to begin at Thursday’s Pilot Club Roast of Dr. Don Robinson.
The roasting jabs, coming from friends, family and his pastor, centered on stories of his past and endless puns about his profession of gynecology.
Roasters included Bo Jones, as the master of ceremonies, Rev. Randy Mosley of First United Methodist Church, friend Brent Loeffler, a skit by his nursing staff at the hospital and his daughter Laura, who appeared as a mystery roaster.
The night began with a heartfelt invocation by Marie Stapleton, the Pilot Club chaplain that set the tone for the rest of the night.
“The evening was very meaningful and light hearted but there were serious undertones,” Pilot Club president elect Emily Yent said.
Stapleton told her own personal story of healing with Dr. Robinson.
“I want to thank you for saving my life, for the time you gave me with my husband, I got to see my daughters graduate and hold both of my granddaughters when they were born — thank you,” Stapleton said. After a prayer and some tears, Stapleton quickly charged into jokes about Robinson’s personality.
Robinson, who was referred to as the “combat gynecologist” by the roasters because of his military background, was quick to zing back.
“He was such a good sport and we were so glad we recruited him for the roast,” Yent said. “The event is a fundraiser for our organization and our primary focus is on brain-related disorders.”
There were more than 90 tickets sold to the event at the Charter House Thursday.
“I think we had a very good turnout and diverse group of all segments of the community represented,” Yent said.
There were multiple members of the First United Methodist congregation, where Robinson attends. Rev. Randy Mosley of the Methodist church dressed as a Blues Brother to make his entrance and once the jokes were aside, spoke about Robinson’s character.
“He is a Godly man, a spiritual man and a doctor that believes in praying with his patients,” Mosley said.
In Robinson’s rebuttal to conclude the night, he apologized jokingly for the “x-rated” humor throughout the night that was due to his profession.
“I have never felt so love in such a strange way,” Robinson said.