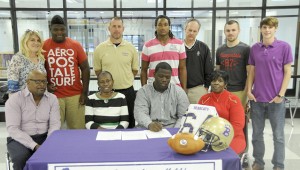 Malik Tate, center, signs his letter of intent for Benedict College among friends, family and coahces. Tate was a lineman during the 2013 Bearcats football season and is a successful student.

Senior offensive and defensive lineman Malik Tate will be putting on a purple and gold uniform next season, but it won’t be for the Bearcats. He’ll be playing for the Benedict College Tigers in Columbia, S.C.
Tate, six-feet-four-inches and 325 pounds, had an outstanding 2013 season as a Bearcat, known for playing smart and defensive football. Benedict College took notice of the lineman and put effort into keeping in touch with him.
“They contacted me and kept on calling, making sure I was okay,” Tate said. “They offered me a full ride. Hopefully we can win our championship. I’m looking for good competition.”
Tate signed his letter of intent at the Bainbridge gymnasium Wednesday surrounded by his parents, grandmother, coach Jeff Littleton and friends.
Tate was able to excel in both the classroom and on the football field, giving him the opportunity to take his love of football to the collegiate level.
“I’m extremely proud of Malik,” Littleton said. “Not only did he take care of his business on the football field, but he also took care of business in the classroom. That afforded him the opportunity to go to college, play football and get a free education.”
Benedict College is part of the Southern Intercollegiate Athletic Conference. Tate and the Tigers will be competing against schools such as Albany State, Clark Atlantic and Kentucky State. The college built the Charlie W. Johnson Stadium in 2006 for home football games.
Look for more Bearcats to sign letters of intent over the next few weeks.