Are officials keeping momentum of safety after Newtown tragedy? 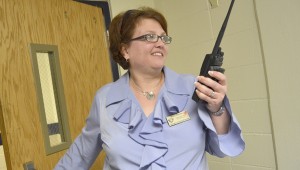 The topic of school safety has made headlines nationwide as school systems reevaluate their safety measures more than one year after the deadly Newtown, Conn. school shootings.
It seems school shootings and other violent instances are happening despite increased security put in place after the massacre.
But administrators and officials with the Decatur County Board of Education said they are not letting faculty and staff members slow down and become more relaxed with safety just because time has passed from the tragedy.
“We keep doing drills, we keep bringing up these issues and we are keeping people informed about what is going on,” Bainbridge Middle School Principal John Wooden said. “We want to keep this fresh in people’s minds — we are telling people when we do drills that these scenarios could be a reality. So we try to conduct as many drills as possible just to make sure these are measures that are ongoing and not forgotten.”

Multiple upgrades
According to Decatur County Superintendent Fred Rayfield, the schools completed a safety upgrade just before the Newtown incident occurred. Then, in the summer of 2013, the school board approved even more upgrades to the schools. More than 100 security cameras were installed over the summer across the nine county schools, including the Performance Learning Center. New glass, locked entryways were installed in Potter Street Elementary, Elcan King Elementary, John Johnson Elementary and the Performance Learning Center. Fencing was placed around the entire perimeter of Bainbridge Middle School — the school campus with the most security upgrades installed.
“This campus has been here for a long time and was a high school before becoming Bainbridge Middle School,” Rayfield said. “There was a really high potential for walk up and walk through traffic.”
Rayfield and Wooden said innocent, and not so innocent, pedestrians would walk through the campus, going from one neighborhood to another while intersecting with crowds of students during class change moving from one building to another. Even cars would use the campus as a cut-through to save on driving time, also intersecting with students during class change.
“So we put up fencing around the entire perimeter and that has cut down the walk ups by 100 percent,” Rayfield said.

New technology
New safety measures also included technology upgrades throughout the last year. With cameras also came the installation of new software for administrators to be able to monitor those cameras throughout the hallways.
Dana Bryant, director for the PLC program that operates on a separated floor on the Bainbridge Middle School campus, said she views her camera feeds from several computers.
Not only is there a control room in the school where resource officers can search for different times and frames, but also they can burn footage to other devices and store the content.
“I can also access from my iPad the cameras at any time,” Bryant said. “Anytime I am on the school system’s wifi, I can view the hallways and stairwells.”
Rayfield jokes that during meetings with all school system administrators, he normally observes them watching their live security footage from their iPads during the meetings.
It is resource, Rayfield says, every administrator is fully taking advantage of and putting to good use.
But there is another resource Bryant calls her “lifeline.”
New Motorola radios can be seen in the hands of administrators as they walk through hallways. Rarely are administrators seen without the radios that are not just typical walkie-talkies.
“They push one button and they are in contact with 911,” Rayfield said. “They can be GPS located, so if they radio in an emergency, resource officers and other safety personnel can find them with GPS whether they are on campus or not.”
Bryant said transportation units and bus drivers could radio in to her and notify her of problems and disruptions as well.
“These radios are definitely a lifeline,” Bryant said. “We don’t go anywhere without these — rarely am I somewhere in the school without it. It just provides such quick communication. I don’t have to run and find a phone if something goes wrong.”

Parents can get in the way
Though the Newtown, Conn. shootings helped the school system to reprioritize their safety plans, another incident in Decatur County actually gave Rayfield and administrators new insight to what they needed to work on.
A bomb threat at Bainbridge Middle School several years ago gave school officials a key piece of information — that parents trying to pull their children out of school and overreacting can actually slow down the evacuation and lockdown processes in the state of an emergency.
“When we had that bomb threat, the very worst problem we had during that whole process was not what our people did, it was how the parents reacted,” Rayfield said and explained the parents swarmed the school and blocked the perimeter from access to administrators and emergency vehicles while adding to the overall chaos. “We actually had to have state patrolmen remove two or three parents off the steps of the Coliseum because of the way they were reacting.”
Rayfield said at the time his own child was a student in the school and was in the Coliseum with other children.
“After that I decided that these parents should not have to go through another emergency scenario without being given information on what to do and how to react.”
The school system created a brochure and distributed it in December — a brochure detailing for parents what to do in case of an emergency. The handout details the different levels of school lockdown drills and what happens in each case. It also tells parents to remain calm, help keep the roads clear by not driving to the school, keep phone lines open and be patient.
“This is what would be one of our greatest problems we would have to deal with if there were a real situation,” Wooden said, “So we have really focused our efforts on trying to educate parents on what to do.”