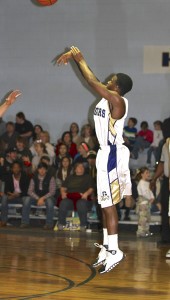 After traveling more than 410 miles in four days, the Grace Christian Academy Cougars and Lady Cougars were happy to see their home court last Friday night for a faceoff against the Georgia Christian Generals. The Lady Cougars fell 64-32, and the Cougars came up short 73-67.
The Lady Generals were a larger team compared to the Lady Cougars, but that didn’t stop the Lady Cougars’ effort. Kelsey Harrell put 10 points on the board and snagged five rebounds. Lindsey Duke followed with seven points. Behind her were Shelby Woodrum and Kaitlyn Holcombe with six points each.
“I felt like their size hurt us, but not as bad on the rebounding as you might expect,” Lady Cougars coach Tommy Yancey said. “But they played a variety of zone defenses. The length of their wing players affected us in getting into our offense. As the game went on, we got more and more frustrated with their length and began to rush some possessions.”
Erin Copeland led the Lady Generals with nine points. Each of the 13 players on the Georgia Christian team were able to score.
“With them being so long, they just kept pushing us out,” Yancey said. “We can’t afford to run our offense at 27 feet instead of 21 to 23 feet like we want to. But the effort was there. The girls battled against the size and didn’t let them dominate us on the boards. That was the first time we have seen a team with that kind of length and size across the board all year.”
The Cougars played a fast-paced thriller against the Generals, but in the end they weren’t able to seal the lead.
The Generals made their free throws down the stretch to extend their one-point lead to a six-point lead with only 36 seconds left on the clock.
Brent Noble led the Cougars with a solid 26 points, six rebounds, three assists and four steals. He was five for nine from the three-point line.
Behind him, Jack McRae finished with a double-double, hitting 22 points and 16 rebounds for the Cougars. Garvis Kelley put 16 points on the board with eight assists.
“I thought our guys played exceptionally hard tonight,” Yancey said. “We could have played smarter, but I don’t see how we could have played any harder.”
Both teams battled back and forth with the lead changing hands eight times in the second half. The Cougars held their last lead of the third quarter with 1:13 going up by one points on a three-pointer by Noble. Grace Christian responded two possessions later with a three-pointer of their own to give the Generals a two-point lead. GCA tied the game on multiple occasions throughout the fourth quarter, gaining the lead again briefly with 2:06 in the fourth.
The Generals maintained their lead at the end of the game with great free throw shooting.
“Georgia Christian is a very talented team with a couple guys who will be playing at the next level,” Yancey said. “I was pleased to see our guys go out and accept the challenge.  We don’t believe or talk about moral victories here though and we cannot allow ourselves to be pleased with a great game against a great team. We will go back into the gym and get to work to keep getting better. We try to emphasise that we are not competing against the other team, we are competing with ourselves to play at the highest level we are capable of.”