Bainbridge Soup Kitchen looks back on its first year 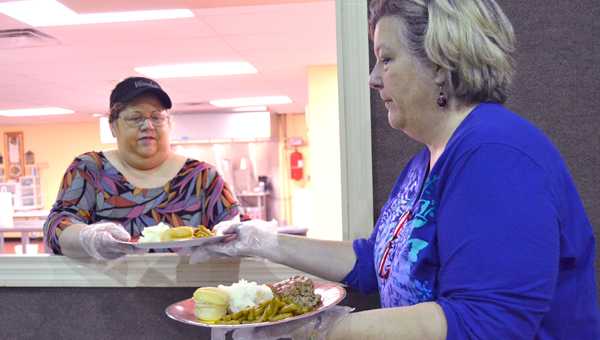 Volunteers Deborah Watts and Kit Griffin serve plates of food Thursday at the Bainbridge Soup Kitchen. The ministry has now been in operation at Bainbridge Church of God for one year.

Volunteers and organizers with the Bainbridge Soup Kitchen are celebrating their one-year anniversary of re-opening under a new church and facility.
The ministry, organizers said, was around for several years before, but they offered a new facility and support that would keep it going one year ago. The original founder was facing some challenges and difficulties.
Now, those at the Bainbridge Soup Kitchen said they have seen lives change, including their own, and hundreds have been fed.
“On Thanksgiving day I saw an elderly woman and several children huddled together on a porch,” Pastor Jamie Rivera of Bainbridge Church of God said. “I thought they were huddled together because it was cold outside, but as I walked closer, I heard the old woman say to the children, ‘Let’s be thankful for what we do have. Amen.’”
Rivera then asked the woman if she was having a Thanksgiving dinner that day. The woman pointed to some collard greens and said she and the children would have those for the night.
“We were able to provide her with a Thanksgiving dinner later that day,” Rivera said, touched that he and those at the soup kitchen were able to make a difference.”
Rivera works closely with volunteers to house the soup kitchen at his church. A three-week renovation had to be done last year to get their kitchen up to code. Soup kitchens, soup kitchen director Kathy McAnelly said, have to be up to the same code standards as restaurants and regularly inspected.
One year ago, a team was assembled and waited patiently on the first Thursday night for people to arrive.
“We had no idea what to expect,” McAnelly said. “When we opened the door that first day, we didn’t know if people were going to support us, if they would stop us — it was nerve-racking.”
Pastor Rivera agreed and said they worked hard to get the word out about the soup kitchen, “But we didn’t know if anyone would show up at all,” he said.
“But they did show up, and people came the next week and week after that,” Rivera said.
Now the team has learned hard lessons on what to do and what not to do. They have even set up strict rules to ensure fairness for all served and have a team of male volunteers that operate as security officers around the church on Thursday night.
The Bainbridge Soup Kitchen delivers boxes of food to shut-ins, and the ministry works in conjunction with those from Men and Women of Action Groups — serving needs wherever they are. Whether it be a house that needs roofing or a family that needs gas money, the ministry is there to offer a hand.
But McAnelly said it all comes back to serving others and seeing a life change.
She spoke about a woman who was once a notorious alcoholic, but now regularly attends church and the soup kitchen.
“I never thought that feeding people would be something that I enjoyed,” McAnelly admitted. “This position just fell in my lap one night, but it is amazing the way that it has affected the people that come. One lady in particular, how it has affected her and changed her life has made every Thursday night and all the other work worth it. That’s what drives me … I don’t want to stop at just serving a plate — I want to do more.”
The Bainbridge Soup Kitchen is not just for the homeless, which is often a misconception. The ministry offers food to those that need it and helps reach out for other needs.
“We need prayer always, but we also need the support of the community and the understanding that this is not about a denomination, but a church that is serving the needs of a community and following a call to home missions,” Rivera said.