How South Georgia used to take advantage of cold days 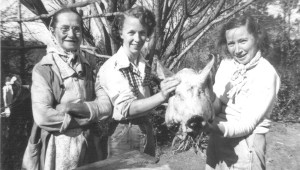 It’s cold in South Georgia. The rest of the country is experiencing freezing temperatures and blizzards, but the south has a different way of embracing the cold. It reminds me of what the old timers called “Hog Killing” weather.
“We must get up real soon in the morning, the weather’s just right for hog killing,” were the words of the farmer to his son. “Soon” was interpreted as “early.”
The wind was bending the trees to its will that day, much like Monday’s wind. The farmer knew the next day would be freezing weather, just right for hog killing in the early morning. In those days, the meat for families and provided to the stores in Climax came from the nearby farms.
The reason for the cold weather was to protect the meat from spoiling and insects. It also allowed a fire under the scalding pot and in the smoke house for curing the meat. The fire served two purposes: not only did it scald the hog; it kept cold fingers and toes a little warmer.
“Hog killing day” was a day in the country when the whole community came together as one. The children were kept home from school, as they were needed for small chores. They scampered about in the cold morning air, gathering wood for the fires. The excitement grew in the anticipation of killing the hogs. It was also a teaching and learning experience that was part of farm life and the ability to survive, just like killing a yard chicken for the Sunday dinner table. However, my dad did not allow us girls to actually see the killing process.
As the wind whipped that Monday, the word spread though out the countryside that Tuesday was the day. Other neighboring farmers gathered their hogs, making ready for the big kill.
My husband Gene and his sister, Wylene Harrison, remember their dad killing up to 12 hogs at one time. This did not include the neighbor’s hogs.
Hogs were collected the day before and placed in pens. All worked as one to get the job done.
Before daylight the next morning, fires were burning and the water in large sugar kettles began to boil. Sugar kettles on the farm had a twofold purpose.
The kettle is shaped like a huge iron bowl, and in the fall was used to cook cane syrup. Sometimes the syrup was allowed to cook down to sugar, thus the name sugar kettle. A pit is dug out under the kettle and the fire is built under the huge pot. The kettle was shallow enough that a whole hog could be placed in to scald the hair off the meat. Smoke would fill the freezing air.
All parts of the animal were used; nothing was left.
After the hog was scalded and butchered, the meat was cut into sides, hams, shoulders and so on. The ladies took over after the men were through. They began cleaning and scalding the chitlins (large intestines) for stuffing the sausage, cleaning the head and feet to make souse and cutting up the fat and skins to cook out for lard and to make cracklings.
There were no pork chops as this was made into backbone.
The liver and lights (lungs) were cooked along with some fresh ribs or maybe backbone for lunch as the hostess for the day stopped early enough to cook for the large crowd that was taking care of all the other hogs.
At the end of the cold day, all took home the fresh meat for cooking shortly as there were nothing but freezer lockers in Bainbridge (another story for another day), where, for a price, one could freeze and keep the meat.
The sides (bacon), hams, some sausage, and shoulders were to be salt cured and smoked to preserve them.
They were hung in the smoke house, protected from animals and any other dirty things that could ruin them. When the lady of the house wanted something to cook, she only went out and cut what she wanted where the meat hung. Some of the sausage was precooked and placed down in cans of lard.
Hog killing for the whole community was a part of farm life. It supplied the meat for the family for almost a year. Today, this along with several other things has “gone with the wind,” so to speak.
But on cold days such as we have experienced this week, do we really miss those hog killing days?