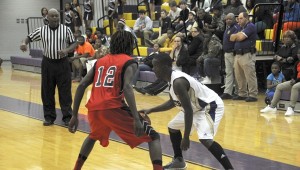 Senior guard Tavares Bowens, guarded by a Miller County Pirate, looks for an open man to pass the ball to during last Saturday’s 64-29 win. Bowens had three points for the night, shooting 50 percent from the field — Powell Cobb

Almost every Bainbridge Bearcat got a chance to score some points for the team Saturday night as they washed away the Miller County Pirates at the Bainbridge gymnasium.
The Bearcats have now improved their record to 6-5 and sport a 3-2 record at home. The Pirates are 1-8 for the season and struggle with away matches, going 0-6 in other school’s gyms.
The first quarter indicated the game might be closer than it turned out being, with the Bearcats putting 17 points through the basket and the Pirates answering with 11 points of their own.
In the second quarter, Bainbridge put in 17 more points and Miller County was only able to add five points to their total.
The teams entered the locker room at halftime with the score 34-16.
By the end of the third quarter, Bainbridge had tossed in 18 more points, while the Pirates were only able to muster six points. By the fourth quarter, most of the Bearcats’ bench was sent to play.
Twelve more points were added to the board for Bainbridge. Miller County added seven points.
After the Bearcats’ close 66-58 loss to the Seminole County Indians last Friday, coach Rickey McCullough said that players needed to step up and lead the team if they wanted to win games.
“That team was a playoff type team,” McCullough said after their loss last Friday. “We’re struggling with some guys who need to step up and make some plays.”
The Bearcats were able answer their coaches call Saturday night and create a momentum that held them in the lead for the entire game.
Sophomores led the team in scoring against the Pirates. Point guard Tyree Crump was the scoring leader for the Bearcats, sinking 16 points. He was six for 15 from the field and hit four of nine attempted three-pointers. He didn’t throw a single free throw the entire game.
Sophomore forward Myles Thomas was behind Crump, contributing 12 points to the score. He was six for seven from the field, attempted no three-pointers and no free throws.
Senior Stephen Johnson was in single digits with eight points for the night. Johnson shot three for seven from the field and was two for two from the line.
Senior forward Dominique Douglas had a slow night, but his impact was still crucial to the Bearcats’ blowout win. He shot two for four from the field and sank both of his free throw attempts.
The Bearcats played a clean, fast game against Miller County, making no personal fouls.
They were able to snag 40 rebounds, 17 of them offensive and 23 of them defensive. They made only seven turnovers against the Pirates, their lowest of the season.
The Bearcats faced off against Lincoln High School Tuesday night.
They play Harris County in Hamilton on Friday at 7:30 p.m., then finish off the week at home against Northside Columbus, also at 7:30 p.m.