Man dies in house fire Saturday, cause of death unknown 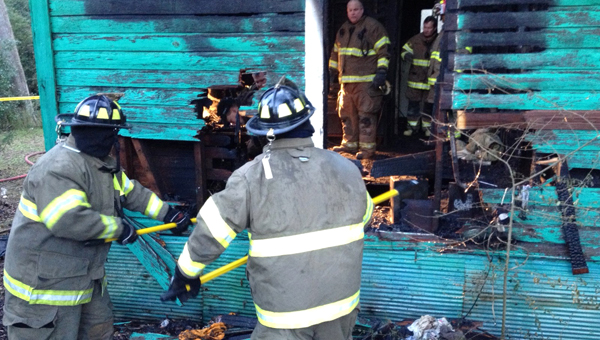 Firefighters with Decatur County and Bainbridge Public Safety tear through walls of a home on Green Street to investigate the cause of a fire early Saturday morning. The fire began in the victim’s bedroom and was contained within 30 minutes of officers arriving. The fire caused one fatality and the cause is still under investigation.

A Bainbridge man died in a house fire early Saturday morning and the cause of death is still not known as the State Fire Marshal’s Office has been called in to assist in the investigation.
Willie Williams died in his bedroom at 510 Green Street once the fire began in his bedroom.
Investigators learned that Williams shares the home with his granddaughter Keisha Griffin, great grandson David Jackson and Griffin’s boyfriend Christopher Stovall.
At 4:28 a.m. Bainbridge Public Safety was called to the scene.  When they arrived, they discovered smoke coming from the house and fire in the back bedroom of the home.  BPS was able to contain the fire to the back bedroom.
More than 20 Bainbridge Public Safety officers and firefighters with Decatur County responded to the scene, according the BPS director Eric Miller.
“It took about 30 minutes to get the flames contained and under control and it took several hours to conduct investigations,” Millers said.
Miller said a BPS officer was on patrol and found the fire.
“He was on patrol in that neighborhood and called for help and helped get everyone out as best he could,” Miller said.
Officers learned that Jackson had been asleep in the living room when he woke up to the smell of smoke.  He tried to get to Williams’ room, but the smoke was too bad, so he exited the house and knocked on the bedroom’s window and exterior walls.
Griffin and Stovall were able to exit the home and saw fire coming from the back bedroom where Williams was sleeping.  At that time, they called 911.
No foul play is suspected.  Because a death occurred the State Fire Marshal’s Office has been called in the assist in the investigation.
Miller said all residents should be mindful of fire hazards in cold weather including space heaters, heated blankets and stoves.