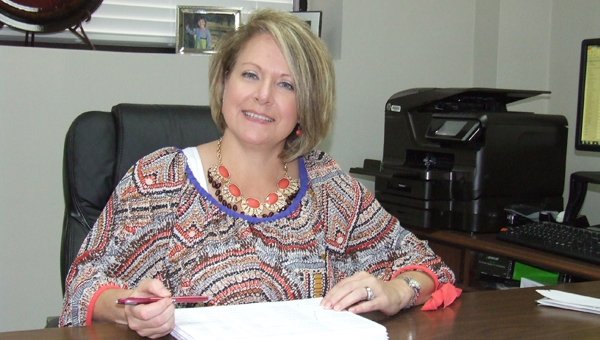 Melinda Taylor, affiliated with State Farm for two years, is taking over the agency formerly owned by Billy Inlow. She spent 18 months interning in Thomasville and then went on to complete her training to open her own agency. — Carolyn Iamon

Melinda Granthum Taylor, former Bainbridge resident, has come back home to open the Melinda Taylor State Farm insurance agency.
Taylor is taking over the agency formerly operated by Billy Inlow.
However there is a new office location at 224 West Street, the corner building formerly occupied by The Money Tree offices.
Taylor graduated from Bainbridge High School in 1986, attended Bainbridge College, and worked for nine years as director of sales for Pepi Food Services.
During her tenure with Pepi, she said she had the privilege of working with Vic Pemberton and obtained further education through Michigan State University’s executive development program.
After Pepi moved their offices to Dothan, Ala., she decided to look for a new career.
She has been affiliated with State Farm Insurance for two years.
After completing an internship with Steven Gainous in Thomasville for 18 months she went on to complete the training necessary to open her own State Farm agency.
She said she saw the opportunity to help people with financial services as well as insurance.
“My life has been enriched by State Farm, and I am looking forward to giving the people the same service they have previously enjoyed with State Farm,” she said.
Additional members of “Team Taylor” are Tammy Brock, office manager, Scott Aldridge and Tyler Poole.
Taylor and her husband, Neal Taylor Sr., have a blended family of four children and reside on Taylor Oaks farm outside Pelham.
She said it is good to be back home in Bainbridge and she plans to get involved with community agencies and services.
The office officially opened to the public on Jan. 2. The phone number is (229) 246-0442.

What you need to know about changes coming to…