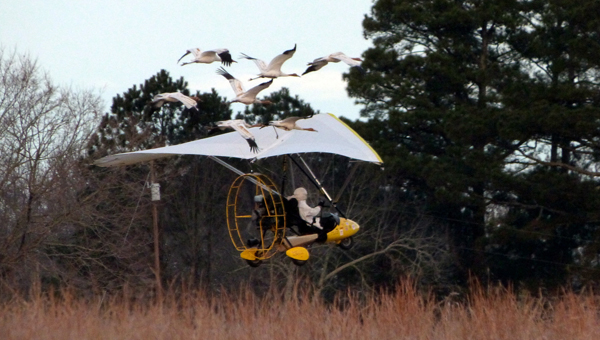 A flock of eight Whooping Cranes, an endangered species, landed in Climax last week on their annual migration to Florida led by ultra-lite planes. — Photo by Operation Migration

Monday Dec. 30, I received my yearly call from that special fellow in Climax who knows everything about migrating Whooping Cranes. “Jean Ann, the Whooping Cranes have just  flown over your house to the holding place near Climax,” was the message on my answering machine.
Checking this information out, sure enough as always, my informant was correct. Climb Max Areodome landing strip near Climax, formerly known as Larry Harrison air strip is the spot where the campers and ultra-lite planes ­— the planes that aid the Whooping Cranes in migration — are stationed.
But, the viewing spot, or location for the cranes themselves, is on Bell Dixon Road, just east of Fewell Road intersection near Climax.
According to the field journal of Operation Migration for the Whooping Cranes, this is the 13th year of migration through Georgia. On Oct. 18, 2013, James Bruggers posted in the journal that eight young Whooping Cranes were winging their way South led by ultra-lite planes through Wisconsin, Illinois, Kentucky, Tennessee, Alabama and Georgia.
Their goal is to get to the St. Marks National Wild life refuge in Florida.
On Dec. 30 a post from the lead pilot Richard stated everything was going well, with good flying time and wind speeds.
However, one bird dropped down low and was left for the second pilot to pick up.
It was decided that since it was such nice weather, they would try for Decatur County and in the last 60 miles of the journey, different birds took the lead and the group soon reached Climax with 8 chicks.
Tuesday, Dec. 31, these 7-month-old Whooping Crane chicks left Climax and were delivered to their winter home in St. Marks National Wildlife Refuge in Florida. Sunrise is about 7:35 a.m. and flight began at 7:45 a.m. They will make their return trip in the spring when migration begins on their own.
In 2011, two young Whooping Cranes were shot near Albany on their way North. So as these eight chicks leave, Climax bird watchers are encouraged to watch the migration, but to spread the word that these are endangered species and the public are asked not to shoot or touch them in any way.
Thanks Jack for being my look out, and we look forward to next year’s flight of the Whooping Cranes.