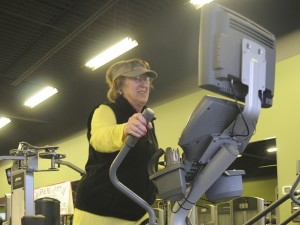 Now that 2014 has been ushered in, many Americans view the New Year as a clean slate to make positive changes to their lives. Some of the most popular resolutions every year are to quit smoking or to volunteer more, but the most common resolution is to join a gym and get in shape.
“From here until March or April, we will be really, really packed out,” Bainbridge Anytime Fitness manager Kim Mills said.
Anytime Fitness currently offers over 20 fitness classes a week. Mills said she has some ideas for new programs that will help people stick with their resolutions throughout the year.
“One of the new things that seems to be successful at a lot of gyms is small group training,” Mills said. “It’s more cost efficient and you’re still working in a group, but the trainer can give you that individual attention. But there’s also that social aspect to it.”
Mills said she was confident in her instructors to help people achieve their goals. Having workouts and class scheduled is a good way to make exercising fun, and also creates an accountability aspect for being at the gym on time.
Mills is also gearing up for a class called “pound fitness,” an exercise that incorporates quarter-pound drumsticks. In a 30-minute workout, members will have banged out up to 1,500 reps.
“One of my favorite sayings is working out should be like brushing your teeth,” Mills said. “It should be incorporated into everything you do on a daily basis. The more you move, the better.”
Bainbridge-Decatur County YMCA membership director Crystal Hine said she has seen around two to three new members joining a day for the past couple weeks. Instead of them joining and dropping out a few months later, Hine said the YMCA tries to hook them into a healthy lifestyle from the moment they come aboard.
“We try to engage them,” she said, mentioning the option for new members to sign up for a personal trainer to help determine realistic goals and motivate them. “We also track people’s visits, so we can reach out to them if they haven’t been coming in lately.”
Last year, of all the new members that joined the YMCA for the new year, only seven to eight percent have dropped out, Hine said. The most likely members to stay are families, while the most unlikely are young adults.
YMCA fitness director Kathy Bell has a philosophy about New Year’s resolutions to help people stick to a more active lifestyle.
“We try to promote fitness year-round,” she said. “Healthy lifestyle resolutions should be a year-long thing, not just a January thing. We would rather you save more money or take a vacation.”
With over 148 fitness classes offered a month at the YMCA, Bell wants to see residents taking advantage of healthy lifestyle choices every day, regardless of time of year.
Nevertheless, Bell is starting a new six-week fitness program starting Jan. 6 for those serious about dropping some pounds. It’s a High Intensity Interval Training class, a fat-burning workout with proven results. Bell said she is passionate about HIIT and hopes to see members both new and old join her.
“It’s good for the people with a fast-paced lifestyle,” Bell said about her HIIT class. “It takes you to an anaerobic threshold and burns more weight, faster.”

They wish he was home for Christmas