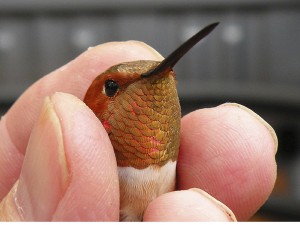 Morgan Keel, a local biologist, holds the Rufus hummingbird she found near an empty birdfeeder in her backyard. Keel and a professional bander from Tallahasse marked the bird with a pink dot on its head. The Rufus hummingbird weighed roughly 3.6 grams — Photo Submitted

Attention to all the bird watchers in Bainbridge: be on the lookout for a rufus hummingbird with a pink dot on his head. He was last seen on Culbreth Street in Bainbridge on December 21.
Rufus was first seen by Morgan Keel when the bird visited an empty backyard feeder at the Keel home on Thursday, Dec. 19.
Morgan, a biologist, realized this species normally breeds from Northern California to Alaska and migrates down to Mexico, with occasional ones coming to the Southeastern coast to winter over. She first called her husband Matthew, manager of Silver Lake Wildlife Management area and told him what she had seen.
She then reported her sighting to her mother who works for the Florida Fish and Wildlife Commission and her mother recommended she contact Fred Dietrich, a professional bander of wildlife in Tallahassee.
Morgan filled her bird feeder with fresh food and the bird came and fed all day on Friday the 20th. On Saturday, Dietrich came with a trap, which he installed around the feeder and armed a trap door attached to a fishing line. The little bird kept buzzing them the whole time they were installing the cage.
Dietrich then stood off at a distance and when the bird flew in he lowered the door. After reaching in and catching the bird, he placed it in a nylon stocking and took it to his truck where he weighed and measured it, before placing the tiny metal band around his foot and painting a small pink dot on its head to identify it.
The tiny bird weighted 3.6 grams and Dietrich said at this time of year a male rufus would normally weigh 3 grams. He surmised it was probably not done migrating.
Morgan said the bird remained calm throughout the whole procedure. She and her husband each were allowed to hold it in their hands before they turned it loose. They blew on the bird to encourage it to fly and once it took off it has not been back.
Morgan said they tag the wildlife to learn more about their migration patterns. They want to find their travel routes. Often a banded bird is captured again many miles away from where it was banded. The metal band has numbers that tell the bird finder how to contact the North America Bird Banding Program. It is administered by the U.S. Geological Survey
Morgan said she has learned that the rufus hummingbirds are only here in the winter and now that people are hearing about her experience she has had several people tell her they have seen them also.
The same day Dietrich was in Bainbridge banding Rufus, he received a call from a man in Tennessee who had recaptured one that had been banded in Tallahassee. He has also had a Tallahassee bird found in Alaska, 3500 miles away.
Morgan recommends keeping an empty feeder up over the winter and keep an eye out for them. You could potentially get a visiting Rufus.
She would really love to know if hers with the pink head is spotted again in Bainbridge. After his experience on Culbreth Street he has not returned to her home. She can be reached at morgan.keel@envrg.com