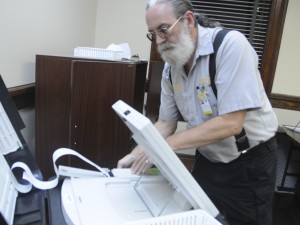 The election in total this November cost the City of Bainbridge more than $11,000 and there were a total of 174 votes cast — Ashley Johnson

The election in November saw one of the worst voter turnouts election and poll officials saw in years. The Bainbridge City Council officially received the invoice for the cost of the election from the Decatur County Board of Elections at the beginning of December and approved the bill.

The invoice shows the election, which had one council race with opposition, cost the city $11,886.97.

In the only race with opposition — Alderman Post 2 District A — incumbent Joe Sweet won against opponent Richard A. Mosley II with 85.59 percent of the votes.

Voter turnout shows that 2.92 percent of those that were registered in the districts holding races voted back in November.

“This is the price of democracy,” Dr. Raymond L. Chambers, current chairman of the board of elections and registration for Decatur County said in response to the cost of the small election. “If you want to have a role in choosing those decision makers you have for you then you have to be prepared to pay a price of some sort.”

Chambers, who teaches government classes at Bainbridge State College, said the process would cost less per vote if there were greater turnouts and more were civically engaged in the voting process.

“It would obviously cost a whole lot less [per vote] if more people paid attention to what’s going on in their community and how they get things done,” Chambers said. “They should ask candidates ‘why do you want to be a candidate? Why do you want to be in this office? Why should we elect you?’”

Chambers said he attributes low turnout to the fact that the election was an off year, meaning there was no midterm election or presidential election involved. Generally, he said, smaller local elections see lower numbers.

He also said there is a problem in general with lack of participation in the democratic process.

Mega Millions rolls up to $636 million