Mega Millions rolls up to $636 million 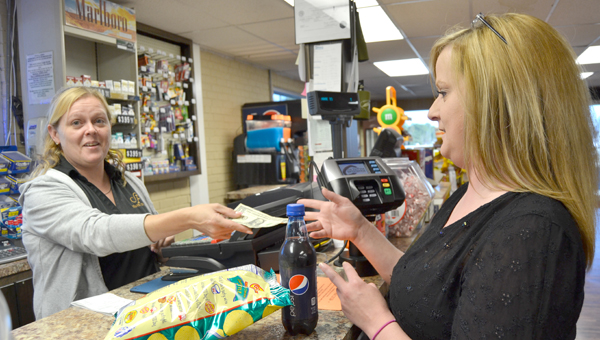 Lisa Haire, right, buys a $1 ticket for the Mega Millions Jackpot at Southwind Truck Stop just to try her luck at the $636 million prize.

Georgia Lottery officials said this is the season to be jolly for jackpots as they announced the Mega Millions jackpot for Tuesday’s drawing would jump over $586 million.
Tuesday afternoon Georgia Lottery officials released a statement saying they estimated the Mega Millions jackpot to rise from $586 million to $636 million because of such strong sales.
According to the statement, the jackpot began rolling Oct. 4 and has rolled 21 times.
At lunchtime Tuesday, many convenient stores in Bainbridge and other lottery sale locations reported an increase in traffic.
One location, Southwind Truck Stop on Georgia Highway 84, said they saw an increase in sales Tuesday as the jackpot continued to increase.
“It wasn’t too crazy but I did sell a lot of tickets,” store clerk Brandi Olds said Tuesday at the Truck Stop. “I would guess we have sold more than 100 tickets.”
Olds said selling that many tickets is not normal, though they often sell many.
She suspects more people are purchasing tickets because the holidays are approaching.
Mega Millions offers two jackpot payment options: the $636 million annuity prize paid out as one immediate payment followed by 29 annual graduated payments; or the cash option, which is approximately $341 million.
It costs $1 to play Mega Millions for a chance to win. Players can multiply prizes with the Megaplier option for an additional $1 per play.
As with all other Georgia Lottery games, proceeds from Mega Millions will benefit education in the state of Georgia.
The drawing will be held Tuesday, Dec. 17 at 11 p.m.
The overall odds of winning any prize, according to Georgia Lottery officials, are 1:14. The odds of winning a jackpot prize are 1:259 million.