Catching up with Bainbridge athletes and coaches 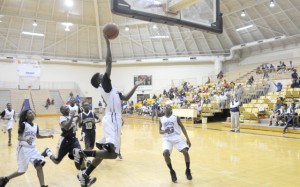 I would like to wish all my friends, news sources and readers a very merry Christmas and the happiest of New Year’s.
I am truly blessed to have so many friends and neighbors who have always been there to support me through the years. One of the greatest enjoyments I have is reminiscing with former Bainbridge High School Bearcats and Lady Cats athletes I covered through the years.
Recently I had the pleasure of chatting with Dot Pierce, one of the best guards ever to play with the Lady Cats basketball team. She played for former Lady Cats head coach, former Bainbridge High School principal and one of my dear friends, Bobby Trawick. During her senior season she helped lead coach Trawick’s 1981-1982 Lady Cats team to the State final four at Georgia Tech’s Alexander Memorial Coliseum in Atlanta.
Dot, who now coaches the Bainbridge Middle School seventh and eighth grade Lady Cats basketball team, played with forward Terralyn Edwards, another former outstanding Lady Cats performer.
A number of years ago I had the pleasure and honor of covering Terralyn’s induction into the Armstrong State University Sports Hall of Fame in Savannah where she was an outstanding player. I really enjoyed reminiscing with her back then.
Recently I ran into Makel Cooper, a starting defensive tackle on coach Ralph Jones’s 1982 Bearcats State Class 1AAA championship football team and we had a great time reliving many of the thrilling moments of that great season. He said the field conditions in Gainesville the night of the Bearcats 7-6 state championship clinching victory over the Gainesville High School Red Elephants was the worst he had ever played in, and I can truly understand that feeling.
I covered that 1982 state champion clinching game.
While talking with Makel, he also told me how proud he was of his two nephews, Bearcats senior wide receiver Greg Cooper and Bearcats senior running back Craig Cooper.
Friday at the Grace Christian Academy Lady Cougars and Cougars basketball games against the visiting Robert F. Munroe School Lady Bobcats and Bobcats, I had the opportunity to talk with Dr. Mallory McRae and his wife, Mardi, who were both outstanding athletes. Their son Jack McRae is an outstanding center with the Cougars. Dr. McRae and his wife, the former Mardi Shiver, who was an outstanding Bainbridge High School cheerleader, were both former Bainbridge High School senior Athletes of the Year who I had the honor of covering.
Dr. McRae was a strong basketball player at Bainbridge High School, but his number one strength was tennis, a sport he won two state championships in under coach Jackie Lee.  He won the state singles championship, and he and Erman Tanjuatco won the state doubles championship. He also played tennis at Presbyterian College.
Bearcat head basketball coaches I covered included the late coach Charles Bess, coach Stan Strickland, coach Larry Slaughter coach Jeff Page and current coach Rickey McCullough.
Lady Cats head basketball coaches I covered included Trawick, Steve Hartzog, LeAnn Harrell Inlow, Ken Bird, Larry Slaughter, Babs Coyle, Latreisha Moon and current Lady Cats coach Kelvin Cochran.
Bearcats head football coaches I covered included coach J.B. Roland, Prescott Eorsyth, Miller Shealy, Jimmy Hightower, Ralph Jones, Sonny Smart, Steve Bench, Bob Christmas, Greg Guy, Ricky Woods, Ed Pilcher and current Bearcats coach Jeff Littleton.
Recalling old times during conversations with former Bainbridge Bearcat and Lady Cat athletes and coaches I covered is very rewarding.