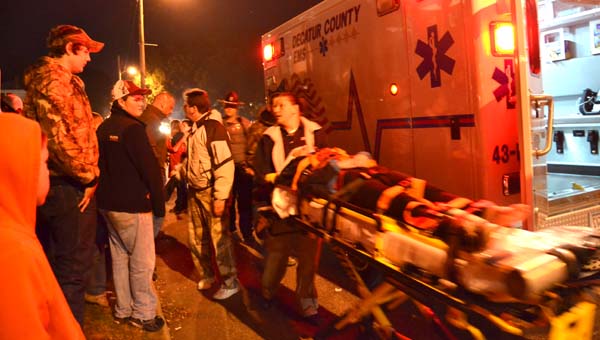 A 13-year-old girl was injured after a float she was on ran over her foot. — Ashley Johnson

The annual Bainbridge Christmas Parade ended with more than just Santa waving from the top of a fire engine.

A 13-year-old girl was injured after reportedly getting caught in a Christmas float for her church and sent to Memorial Hospital to be treated for injuries.

The young victim was part of a float from Southwest Baptist Church carrying youth dressed in nativity clothing.

“It looked like she was going to throw candy and somehow she got caught in the wheel,” Carla Parrish said, the woman who watched the incident happen from the sidelines and ran to help. “Her shoe fell off when the wheel ran over her, but grabbed her and took her sock off — she immediately started bruising.”

Parrish happens to be the nurse at West Bainbridge Elementary and ran after the young girl when she saw the incident occur past First Baptist Church on Shotwell Street.

As the final float with Santa Clause passed by, the ambulance was able to pull up and respond to the incident as a small crowd gathered.

Several doctors were in the crowd to help attend to her as well, according to those who witnessed the event.

Parrish said the young girl was conscious, but was in shock and did not know what to do. It was the top of her foot that was injured.

Bainbridge Mayor Edward Reynolds said the Bainbridge City Council would be the party to make rules and regulations for further safety measures should a question or discussion about safety come up — whether it be for participants on floats or for children grabbing candy in the street.

“I think safety is always an issue unfortunately for families that are not more controlling of their children running out in the street,” Reynolds said. “This was a different scenario though — but we are always open for a dialogue on safety and we are always looking to make sure these things don’t happen.”