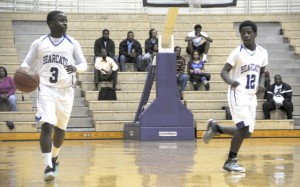 Eighth grade Bearcat Kendall Lodman dribbles the ball down court while Markell Broadnax hurries to get open. Lodman had 17 points for the night and helped carry the team to a 44-40 victory against Pelham — Powell Cobb

The eighth grade Bearcat basketball team’s first season game in early November was a heartbreaker. The Pelham hornets hosted Bainbridge and defeated them in a 43-37 thriller. Luckily, the loss didn’t discourage the Bearcats as they rolled over every other team on their schedule.
Wednesday night, the Bearcats (6-1) defeated the Hornets 44-40 at the Coliseum in a nail biting rematch that had both teams bringing their best to the court.
“We just had this one marked on our calendar,” eighth grade basketball coach Heith Maxwell said. “We wanted to play it.”
The Bearcats’ first loss against them came from a lack of preparation. The majority of the team and Coach Maxwell entered the season hot off the heels of a football championship, giving them a two-week delay.
“And they beat us both times last year,” Maxwell added.
The Bearcats fought back-and-forth with the Hornets for the majority of the game. Pelham played aggressive and clean basketball, putting Bainbridge to the test.
Point guard Kendall Lodman led the team with 17 points total for the night. He hit a buzzer beating three-pointer to give the Bearcats a 23-22 lead at halftime.
For the rest of the game, Lodman had a knack for putting the ball through the hoop, fighting aggressively underneath the basket for layups.
“He’s been too passive,” Maxwell said about Lodman. “I talked to him after the (Thomas County Central) game the other night and I said, ‘Big guy you have to start doing more.’ And he did more.”
Behind Lodman was David Smart with 11 points. Desmond Thomas had a strong game as well, hitting two big three-pointers to sway the game in the Bearcat’s lead.
The real key to the Bearcats’ stellar win was defense.
“They played discipline defense,” Maxwell said. “They had a bad habit of just wanting to guard the ball. They actually boxed out a little bit.”
Maxwell said he and his players came into the game knowing it was going to be a close match.
“We practice the day before on holding the ball because we knew it was going to be within a few points,” he said.
The eighth grade Bearcats have a break for the rest of December before returning for the second half of their season in January. When the Bearcats return in 2014, they’ll have six days to prepare for a game against Seminole.
“When we come back we have Cairo twice, Seminole twice and then we’ll do a tournament,” Maxwell said.