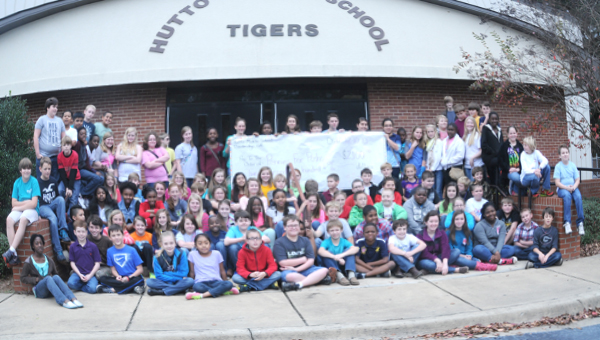 A group of 100 students from Hutto Middle School raised more than $2,000 to build a well in Uganda this month. The students exceeded their teachers’ expectations of $1,000 at their market. — Ashley Johnson

Sixth grader Daniel Sellers worked in his father’s shop to make turkey calls for the Merry Market at Hutto Middle School last week. He had no idea the school would raise as much as they did, and exceed expectations of teachers and administrators. Students like Sarah Caroline Darley made sweet treats. Darley rolled crushed Oreos into Oreo snowballs and dipped apples into caramel.
98 other students did the same — creating crafts and treats of all kinds to sell for 50 cent-ticket each.
Thanks to Hutto Middle School’s Merry Market, the Namayemba School in Uganda is $2,000 closer from having fresh water from a new well.
“We have been teaching the students in STEM about the need for fresh water in Uganda in science class,” social studies STEM teacher Randi New said. “When the students watched videos about Uganda, they came up with the idea to use their Merry Market for a fundraiser.”
The students are normally given tickets for good behavior throughout the semester and then spend those tickets at the market. This year, they charged 50 cents per ticket and hoped to raise $1,000 for the cause. They instead raised $2,100.
Several students received cash prizes for selling the most items. Teachers were touched when those students gave their cash prizes to the cause as well.
700 students participated in the event as customers, while 100 students sold the items.
“They made everything from hair cord bracelets, homemade goodies to locker magnets — there were even some bow and arrows,” New said. “The kids were most excited about being to help the other kids when we showed them the videos of these students who have to walk more than a mile to get fresh clean water. They were really surprised and wanted to help. It was a good way for them to get involved in helping kids around the world.”
Daniel Sellers, who made turkey calls for his classmates, got the second place cash prize of $20.  He said he was excited to help and awaits the outcome of the well.
“I’m sure life is really difficult for them and I really feel for them,” Sellers said of the children he watched in the videos about Uganda. “I just can’t wait to see what happens as soon as this well is built.”
Sellers said he expected the school to raise close to $1,000, but when they raised $2,100 he said he just could not believe it.
“Just like everyone else here, I donated the prize back,” Sellers said.