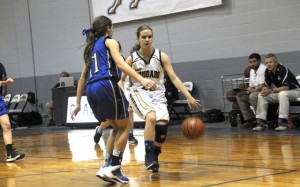 The Lady Cougars fought hard against the Emmanuel Lady Warriors Monday night, and the hard work paid off as the buzzer sounded with a 45-25 victory in the bag.
The Lady Cougars had outstanding defense and held control of the ball well throughout the game.
“The girls just played real hard,” said Lady Cougars head coach Tommy Yancey. “They came out and played with a lot of effort and tried to share the ball the best they could. I think when we switched defense, it really started to help us.”
In the second half, the Lady Cougars switched from man-to-man to zone trap defense, isolating the ball handler and keeping them from successfully moving the ball down the court.
Kaitlyn Adams played outstanding defense and showed a good amount of hustle and fight to keep the ball out of the Lady Warriors’ hands.
Kelsey Harrell led the Lady Cougars with 20 points. She was able to make 13 rebounds, five assists and three steals.
Shelby Woodrun scored 10 points, shooting at 57 percent from the field. She also had 10 rebounds and two steals.
Kaitlyn Holocombe played really well, managing eight rebounds, three steals and two blocks for the night.
“The girls executed and were extremely coachable,” said Yancey. “The worked hard and did what we asked. They went out there and got a win.”
Yancey said he was proud of his players for the win, but there were still a number of things the team needed to work on.
“We’ll continue to work on ball handling and fundamentals,” he said. “Right now with our girls, we just have to get them into a situation where they can play faster and faster.
Yancey also mentioned he wants to start cutting down on turnovers.
“Each game we try to limit it to 10 or fewer turnovers,” he said. “We’ve been falling way short of that, but that’s what we’re trying to work to. That’s always a focal point of ours.
“We figure if we can get a shot every once in a while, we’ll get some in. But if you give it to them, you don’t have a prayer.”