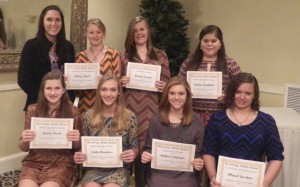 The celebration was held at the Charter House Inn.
Middle school assistant coach Brandi Jackson talked about the team before presenting the awards. Unfortunately, Middle school head coach Lindsey Jarrett was unable to attend the banquet due to illness.
Most coachable awards for strong dedication and hard work on the field went to Bailey Brock, Bailey Rayfield and Shelbie Summerlin.
Morgan Cannon and Addison Enfinger received leadership awards for “take charge” skills. Emily Chambers Jasmine Bell and Abbey Gardner received best attitude awards for their constant positive attitudes.
Most spirited awards for always encouraging their teams with a positive message went to Alyson Matthews, Cyan Gant and Jameala Harrell.
“You are a great group of girls and it was a pleasure for coach Harrett and I to work with you,” coach Jackson said in her banquet address to the middle school team.”
She said she saw the players grow and wished the eighth graders well next year.
“There was a lot of growth in all of you. The eighth graders who will be going to high school next year will be a great asset to the Bainbridge High School Lady Cats program. Coach Jarrett and I look forward to working with this year’s seventh graders as eighth graders next year.”