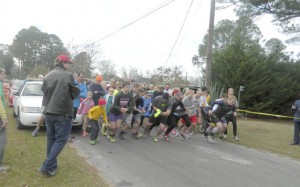 CLIMAX—
Capturing the overall female championship in a time of 23:76 was Julie Genavar of Bainbridge. She was 14th overall.
Both winners described the course as both fair and challenging. They said the biggest challenge was the one hill on the way back.
“You’re going along at a good pace, then you suddenly come up on the hill,” Beauchamp said. “Once you negotiate, it is smooth again.”
Beauchamp agreed and pointed out that it was really important for he and other runners to pace themselves along the way.
“You have got to preserve your energy for the final kick, there were a lot of strong runners at Swine Time.”
Run coordinators Paul Fryer and Chip Ariail both praised the runners for their competitiveness.
“I talked with several runners after the competition and they really complemented the course,” Fryer said. “They said they knew the hill was coming and quickened their pace at the start. They all said they were looking forward to coming back next year and meeting the challenge again.”
Ariail agreed and added that many of the same runners come back year-in and year-out.
“They enjoy the run and, like many others, also enjoy the hog calling contest and other events on the Swine Time special events stage.”
Darlene Collins and Phillip Dodson, president and vice president of the Swine Time sponsoring Climax Community Club, both agree that the run is a major component of Swine Time each year.
“The run is one of the first Swine Time events each year and the runners really look forward to coming to Climax and participating in it,” Collins said.
“We really enjoy the runners being a part of Swine Time,” Dodson added. “They swell the crowd. This year I think the crowd nearly doubled in the afternoon after the weather broke. I estimate we had about 5,000 people throughout the day.”