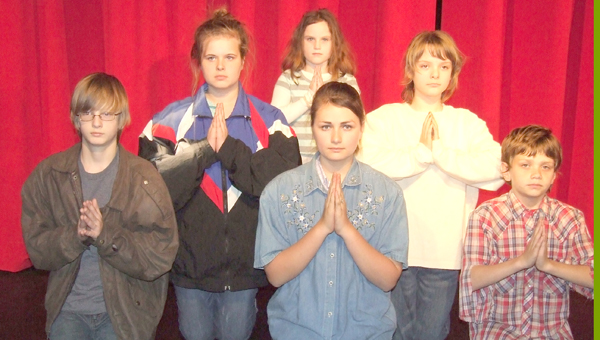 A popular family holiday tradition is to attend a live Christmas play together.
Each year the Bainbridge Little Theatre produces a family oriented play just for that purpose.
The BLT players’ choice this year is, “The Best Christmas Pageant Ever,” a comedy taken from the book, “The Worst Kids in the World,” authored by Barbara Robinson in 1971.
Imagine trying to be in charge of directing a church Christmas pageant with 28 children of all ages and six of them are the Herdman kids, who have the reputation of being the worst kids in town.
The Herdmans have stumbled into church for the first time because they heard there were free treats. Then someone thought it would be a good idea not only to involve them in the pageant, but to cast them in major roles, despite protests from other church members.
A couple, played by Marjorie and Stephen Mayfield, end up in charge of the pageant after all the church ladies find reasons to decline. They cope with multiple problems as they struggle to deal with the Herdmans and the resulting mayhem tells the Christmas story in a way you’ve never heard it told before.
Directed by Amy Wells, the cast includes: Stephen and Marjorie Mayfield as the Bradley parents; Sarah Michael Farrington as Beth Bradley, Jackson Wood as Charlie Bradley.
The six horrendous Herdmans are played by Jonathan Farrington as Ralph,
Alaiya Schuyler as Imogene, Drew Bardin as Leroy, Charlee Coker as “Claudia,” Olivia Andrews as Ollie, and Brooklyn Wade as Gladys.
Brooke Phillips plays Alice Wendleken, Katherine Chapman (Mrs. Armstrong), Stephanie Jones (Mrs. Slocum), Jenna Chambless (Mrs. Clark), Kathy Sarrette (Mrs. Clausing), Winde Farrington as (Mrs. McCarthy), Natalie Milline (Maxine), Seth Jones (Elmer Hopkins), Kell Donalson (Hobie), Maloree Inlow (Darlene), and Shanell Schuyler (Rev. Hopkins).
Angel choir and shepherds are: Ben Bardin, Kathryn Cohen, Aubri Donalson, Cooper Genovar, Reese Godby, Ivey Godby, Ellie Godwin, Coby-James Harper, Shelby Harper, Sybil Lee, Henry Lee, Viviana Schuyler, Lily Wells, Ella Williamson and Latisha Venisee-Cosby.
Wells said she has always loved this play and has directed it several times along with Mary Lynn White at West Bainbridge Middle School.
It is a story that is dear to her heart as she and her daughter Rachel used to crawl into bed together to read it at least once every Christmas season. “That was a very special time for us,” she recalls.
“As a teacher I have seen and taught ‘the Herdmans.’ For children like that to teach us what Christmas is really all about just makes the season.”
The show runs two evening performances, Friday and Saturday night, Dec. 6 and 7 at 7:30 p.m. and has two matinees, one on Saturday, the other on Sunday, Dec. 8. Both are at 2:30 p.m.
Advance tickets are available on line at www.bainbridgelittletheatre.com. Or call 229-246-8345. They are also available at the door.