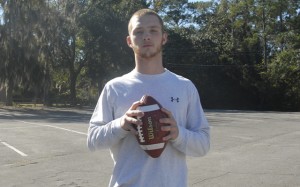 Senior Bearcat quarterback Preston Norris led the team to a 5-5 regular season. Despite the loss against Ware County in the season’s first playoff game, Preston is striving to play at a college level — Powell Cobb

Instead, Norris found his footballs in abundance on the Bainbridge High School practice fields. This season, he wore the quarterback’s jersey and held himself as the team’s leader, something he’s been working on all season.
When he’s on the field, Norris wants to play like Peyton Manning.
“He’s my role model,” Norris said. “I admire just about everything about him.”
When asked what made Manning such an inspirational quarterback for the senior Bearcat, Norris mentioned how great his footwork was. Then he thought for a second longer.
“Everyone knows how smart he is on the field,” Norris said. “He knows everything.”
This past season, Norris tried to bring out a little bit of Manning in himself. He led the Bearcats to a 5-5 regular season, full of a few spectacular wins, namely the comeback and overtime victory against Dothan High School in October. The Bearcats entered the locker room at halftime down 17-3 against the Tigers. They were in an unfamiliar stadium and things didn’t seem to be connecting with the players on the field. Norris stepped up and did his best to rally his troops.
“I was thinking, ‘Uh-oh, this is going to be a long night’,” Norris recalled. “I was trying to be a leader. I told (the team) how everybody knew that we had it in us, we just needed to get going because we didn’t have much time left.”
The Bearcats exploded back out in the second half and took full control of the game. When it came time for Bainbridge to tie the game up, Norris made a play that he called his proudest moment of the season.
“I was rolling out and I saw my first guy, Victor Bodison, got covered,” Norris said. “Greg (Cooper) was my second guy. He was covered in the back of the endzone. I knew I had to throw it up to him and hope he catches it.”
So Norris ripped a high pass right into the end zone. Cooper’s feet left the ground and he grabbed the ball from high in the air. The Dothan defender below him was clamoring for the ball, but Cooper had it.
“I was thinking, ‘Please come down with it and don’t drop it’,” Norris said. Then he saw the refs hands go in the air, signaling a touchdown. “I grinned ear-to-ear and couldn’t stop yelling.”
The Bearcats’ score drove the game into overtime and eventually allowed kicker Daniel Provence to boot on through the goal posts for a win.
Norris’ drive to never give up comes from his own personal experience in life. In his younger years, he saw his parents get a divorce and saw the struggle it brought to their lives.
“That’s really what got me going, that I don’t want to struggle,” Norris said. “My biggest fear is not succeeding. I try everything to the best of my ability.”
He even brought that mentality with him up through eighth grade. That’s the year where he made the decision to focus on football. That meant setting aside baseball, a sport beloved by his dad. He even tried soccer that year, but he knew he belonged on the gridiron.
“Football has always been my love,” Norris said.
Surprisingly, he began the sport as a lineman in his peewee years. Norris stood at 5-foot-10-inches during his fifth grade year.
“I hit my growth spurt really early,” Norris said. “I’ve only grown two inches since fifth grade.”
Now he’s looking to get a job at home depot this spring. In the meantime, he’s looking to get an opportunity playing quarterback in college.
“I’m hoping colleges will start looking at me,” Norris said. “I’ll go to any college that will give me a look, pretty much.